So Here Cometh White Hyacinths: Being a Book of the Heart ..wherein is an Attempt to Body Forth Ideas and Ideals for the Betterment of Men, eke Women, Who are Preparing for Life By Living 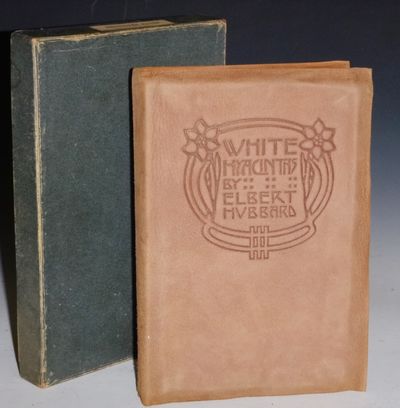 by Hubbard, Elbert and Dard Hunter
East Aurora, New York: Roycrofters, 1907. Octavo. . 161 pages, 3 unnumbered pages, 2 unumbered leaves of plates, two portraits. The Double title page within an ornamental border was done by Dard Hunter. The engravings of Elbert Hubbard and Alice Hubbard are by Jules Gaspard. Since the turn of the century, Hubbard wanted to find something entirely new and experimental. In June 1903, Dard Hunter (1883-1966), then only nineteen came to East Aurora, who designed format, designed the title pages and end pieces and plan the finest typographical layouts. In Hunter's autobiography he describes his training at roycroft and concludes that: "Mr. Hubbard probably had more influence in the development of book-collecting than any other person of his generation" (My Life with Paper, pp. 29-43). Dard Hunter's designs show that he carefully studied the German and Austrian periodicals. His style was a formalized Art Nouveau. This clarity was lacking in the earlier Roycroft books. His work was a departure from the work of Samuel Warner. Even though Dard Hunter left East Aurora in 1910 to continue his studies in Vienna, his borders and spot decorations were used in later editions of the Roycrofter books. The term "eke women" was those many self-sufficient women who came among the hundreds who wanted to work in producing books and furniture in East Aurora which was the center of the Arts and Crafts Movement. Bound in light brown suede stamped in blind, silk pastedowns, yapped edges. This fine copy is in the original gift box marked "White Hyacinths" (Inventory #: 027408)
$75.00 add to cart or Buy Direct from
Alcuin Autographs
Share this item

by Napoleon and Somersrt De Chair

A Gentleman Volunteer: The Letters of Geogre Hennell from the Peninsular War, 1812-1813 with a Foreword By General Sir Antony Read (specially Bound in a Limited Edition of 25 Copies By Zaehnsdorf (inscribed and Signed By Michael Glover and Antony Read)