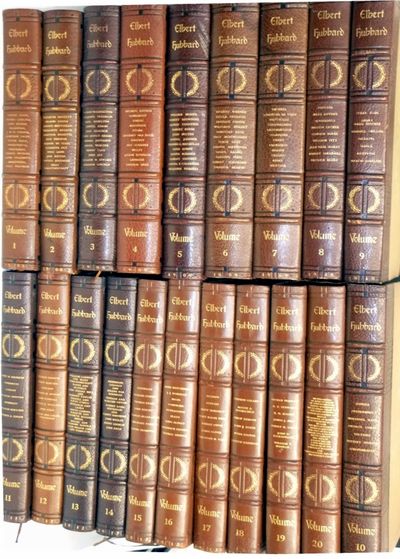 by Hubbard, Elbert
East Aurora, NY; (1908--1915): The Roycroft Shop. Limited Edition. Quarto. Limited to 1000 sets. The present set is #952, each volume signed on the limitation page by Elbert Hubbard or signed by one of his Roycrofters whom he had trained to duplicate the style of his signature. Volume one has two pages of manuscript quotes mounted after the Victor Hugo half-title. 1st page; "Piety is the tinfoil of virtue" which in his Thousand and One Epigrams he writes "Piety is the tinfoil of pretense" (why the change?). 2nd page he writes "Diplomacy is a side-step to Nemesis". Also, laid in is a letter on Roycroft stationary dated 1903 signed by Hubbard. A beautiful set bound in 3/4 brown crushed morocco, decoratively stamped in blind with a design created by Dard Hunter, over paper covered boards, raised bands with compartments lettered and decorated in gilt, top edges gilt, others uncut. Large decorative initials through in brown and black again, designed by Dard Hunter with small flourishes within the text in brown, all printed on thick rich Roycroft paper. Each volume was produced for the subscribers yearly. With 20 volumes, the fine morocco used for the sets were either in different colors (such as brown, green or blue) or same color but maybe a lighter or darker shade throughout the binding process yearly depending on availability. The present set is bound in brown with different shades of brown, not faded. A beautiful work. Hubbard became so inspired by the beautiful work by William Morris of the Kelmscott Press, that he decided to set up and work his own press in 1893. The Roycroft Press soon became one of the most important printing houses of the Arts and Crafts Movement in America. Elbert Hubbard was an author, publisher and philosopher in his own right. He and his wife Alice, who also authored books from their press, were ahead of their time when it came to their philosophy. They both perished during the sinking of the Lusitanian in 1915. In 1904, Dard Hunter began working for the Roycrofters. He soon was designing stained glass for windows in the Roycroft Inn and title pages for Hubbard's press. Hunter's designs for books, leather, glass and metal helped unify the Roycroft product line and distinguish it from that of other American Arts & Crafts enterprises. (Inventory #: 022332)
$2,500.00 add to cart or Buy Direct from
ALCUIN BOOKS, ABAA
Share this item