My Inner Faith (Inscribed By her) 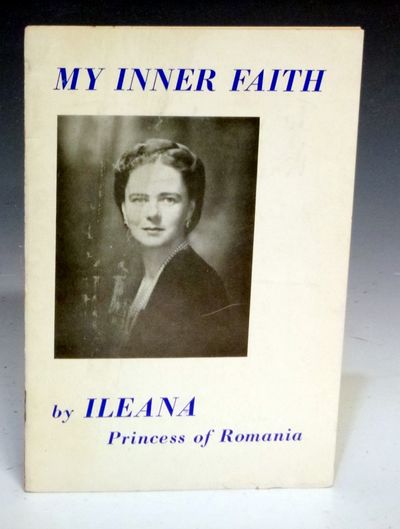 by Ileana (Princess of Romania)
New York; (1957): Morehouse-Gorham Co. First Edition. Small Octavo. 16 pages, a rare booklet not recorded in either NUC or OCLC. Princess Ileana fled the Communist regime in Romania after World War II and lived in Newton, Massachusetts while serving various humanitarian causes. Inscribed: "to my dearest Virginia, Ileana, 1957). Princess Ileana has written simply and movingly of Eastern Orthodoxy, her own faith. "Not only by tradition am I Orthodox," she says, "but from a deep conviction that Orthodoxy holds more than any other, the truth, the spirit and the love of Christianity." From within the bounds of her Church she has evolved her own tion of God with whom she holds constant communion in prayer, meditation, and the sacraments, God who speaks to her especially in the loneliness of pain, saying "stand aside awhile and think things out". But He leads her too to share the pain of others, else her own suffering profits her nothing. God always speaks to her in the still, small voice within, and she emerges from every struggle into more light, understanding and joy, so that her heart overflows with gratitude and she wants to shout aloud, "Lord, how beautiful is Thy creation and how blessed are these who put their trust is Thee". This little book would be an excellent gift to those whose doubts are insistent and who find pain and sorrow almost meaningless. Bound in pictorial wraps depicting a photographic image the princess. (Inventory #: 027406)
$65.00 add to cart or Buy Direct from
Alcuin Autographs
Share this item