Anthracite Coal (inscribed By the author) 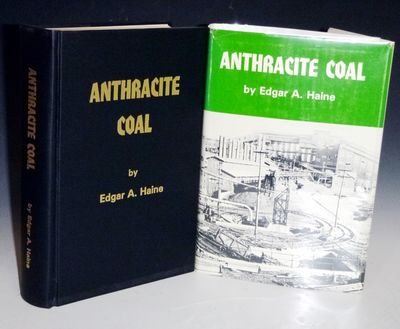 by Haine, (Col.) Edgar A.
Chicago: Adams Press, Chicago, 1969), 1987. First Edition. Octavo. 214 pages, index, profusely illustrated with details. While the author is best known for his books on railroads, he grew up in the coal regions of Pennsylvania where hard coal (or rock coal) was mined. Here there are the accounts of the various mines and mining processes, such as the method of coal removal (mules and electric), ventilation, timbering and the transition from canals to over-the-road transportation. Pasted down on the front endpaper is a note to a friend who also grew up in the region, signed by the author. Laid in is a list of books Col. Haine had published as well as those he had finished waiting for a publisher. Bound in black cloth lettered in gilt, spine lettering gilt, as fine, sharp cornered copy in a pictorial dust jacket with some rubbing and a bit of wear to head. (Inventory #: 027412)
$85.00 add to cart or Buy Direct from
Alcuin Autographs
Share this item