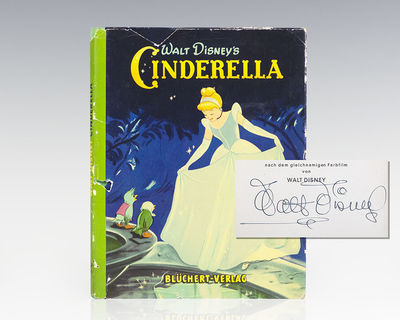 by Disney, Walt
Stuttgart: Bluchert-Verlag, 1951. First German edition of the classic retelling of one of the most celebrated Disney films. Octavo, original illustrated boards, pictorial endpapers, illustrated throughout. Boldly signed by Walt Disney on the half-title page. Near fine in a very good dust jacket. Laid in is a business card of the publisher with a note referencing this was signed in 1953. Rare and desirable signed by Walt Disney. The twelfth Disney animated feature film, Cinderella was released on February 15th 1950 after two years in production. It became the greatest critical and commercial hit for the studio since Snow White and the Seven Dwarfs of 1937, and helped reverse the studio's fortunes. They were, at the time, $4 million in debt and on the verge of bankruptcy. The beloved Little Golden Books series of children's titles were the brainchild of Georges Duplaix, who in 1940 was head of Artists and Writers Guild Inc., a division of Western Publishing. With the idea of producing a colorful, more durable and affordable kind of children's book, Duplaix partnered with Simon & Schuster to print the first 12 titles in the series in 1942. Western later introduced a line of Big Little Golden Books for slightly older children. (Inventory #: 106556)
$7,500.00 add to cart or Buy Direct from
Raptis Rare Books
Share this item