The Tyro. A review of the arts of painting, sculpture and design. No. 2 (of 2 issued) 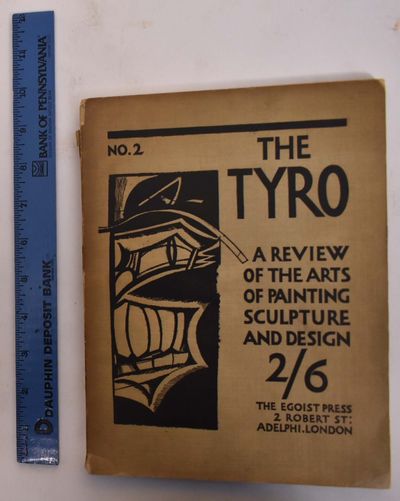 by Lewis, Wyndham (Editor)
London: The Egoist Press, 1922. Paperback. VG, with the exception of rear cover and last glossy sheet have triangular pieces of them taped back on with ancient clear tape where they broke off at the corner. Hinges firm but tender due tothe type of paper the covers are made of, with very minor loss to extremities. Greyish faded printed glued wraps. 63, (1), followed by 17 glossy shetts with bw illustrations printed on 1-side, sometime more than 1 to a page. Includes illustrations of works by Dismorr, Lipschitz, Wyndham Lewis (6), Dobson (2), Etchells (3), Wadsworth (5). Quite scarce. Lewis launched his second magazine, The Tyro, of which there were only two issues. The second (1922) contained an important statement of Lewis's visual aesthetic: 'Essay on the Objective of Plastic Art in our Time'. It was during the early 1920s that he perfected his incisive draughtsmanship." (wikipedia). (Inventory #: 173370)
$900.00 add to cart or Buy Direct from Mullen Books
Share this item