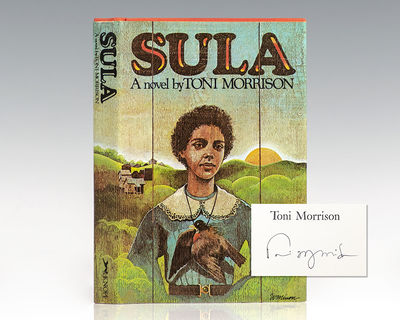 by Morrison, Toni
New York: Alfred A. Knopf, 1973. First edition of the Nobel Prize-winning author's second novel. Octavo, original cloth. Signed by Toni Morrison on the title page. Fine in a fine dust jacket. Jacket design by Wendell Minor. An exceptional example. Nominated for the National Book Award, Sula exemplifies the mysteries of death, friendship, and poverty, and its rare economy in writing is met with critical acclaim and popular success, establishing Morrison as one of the 20th century's most significant novelists. Sara Blackburn wrote that Morrison's extravagantly beautiful, doomed characters are locked in a world where hope for the future is a foreign commodity, yet they are enormously, achingly alive." And Morrison's writing is "[e]xtravagantly beautiful. . . . Enormously, achingly alive. . . . A howl of love and rage, playful and funny as well as hard and bitter" (The New York Times). (Inventory #: 106832)
$2,750.00 add to cart or Buy Direct from
Raptis Rare Books
Share this item