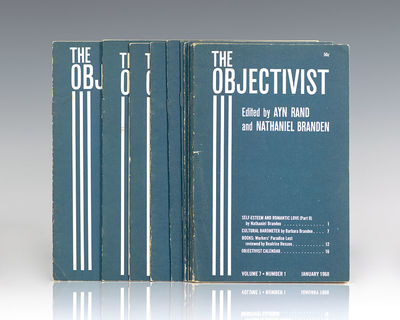 by Edited by Ayn Rand and Nathaniel Braden
New York: The Objectivist, Inc, January - December 1968. First edition complete set of The Objectivist: Volume 7. Octavo, 12 monthly serials, original wrappers as issued. In near fine condition. From 1961 to 1976, Rand was publisher and editor (sometimes co-editor) for three different periodicals: The Objectivist Newsletter, The Objectivist, and The Ayn Rand Letter. In addition to editing, Rand wrote many articles for these publications. In January 1966, The Objectivist replaced The Objectivist Newsletter, with Rand and Branden continuing as co-editors. The renamed publication used a sixteen-page magazine format in place of the previous newsletter format. The number of subscribers reached 21,000 by the end of 1966. Contributors during this period included economists Alan Greenspan and George Reisman, historian Robert Hessen, neurophysiologist Robert Efron, novelists Erika Holzer and Kay Nolte Smith, and philosopher Leonard Peikoff. (Inventory #: 101985)
$250.00 add to cart or Buy Direct from
Raptis Rare Books
Share this item