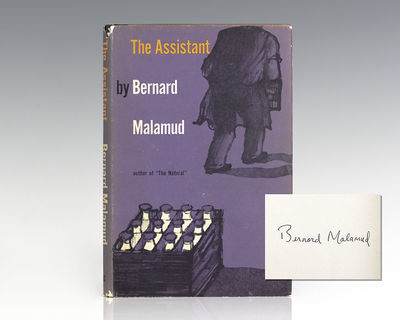 by Malamud, Bernard
New York: Farrar, Straus and Cudahy, 1957. First edition of Malamud's second novel, which went on to win the Daroff Fiction Award from the Jewish Book Council of America and the Award of the National Institute of Arts and Letters. Octavo, original half cloth. Signed by Bernard Malamud on the half-title page. Near fine in a near fine dust jacket with a chip to the crown of the spine. Jacket design by Milton Glaser. Set in a working-class neighborhood of Brooklyn, New York, it explores the situation of first- and second-generation Americans in the early 1950s as experienced by three main characters and the relationships between them: an aging Jewish refugee from the Russian Empire who owns and operates a failing small grocery store, a young Italian American drifter trying to overcome a bad start in life by becoming the grocer's assistant and the grocer's daughter, who becomes romantically involved with her father's assistant despite parental objections and misgivings of her own. It was the basis for the 1998 film directed by Daniel Petrie. Time Magazine named it to its list of "All-Time 100 Novels." (Inventory #: 100488)
$2,000.00 add to cart or Buy Direct from
Raptis Rare Books
Share this item

Drive: The Story of My Life.

Oxford : The Clarendon Press , 1911
(click for more details about A History of England.)
View all from this seller>