Fanaticism; Considerations upon the Expediency of Abolishing Damages on Protested Bills of Exchange, and the Effect of Establishing A Reciprocal Exchange with Europe; Course of Lectures, Delivered by Dionysius Lardner, LL. D., on the Sun, Comets, the Fixed Stars, Electricity, Light and Sound, Steam Navigation, &c. &c. Eight Double Lectures; Lyell's Lectures on Geology. Eight Lectures on Geology, Delivered at the Broadway Tabernacle in the City of New York; Webster on the Currency. Speech of Hon. Daniel Webster, At the Merchants' Meeting in Wall Street, New York, on Monday, September 28, 1840; Wealth and Biography of the Wealthy Citizens of New York City, Comprising An Alphabetical Arrangement of Persons Estimated to be Worth 100,000 and Upwards; A Copy of the Grants to the Van Rensselaer and Livingston Families Together with A History of the Settlement of Albany; Report of Capt. Brewerton, Connected with the Improvement of the Hudson River Navigation. December 26, 1838; Report on a Direct Route for the Easter 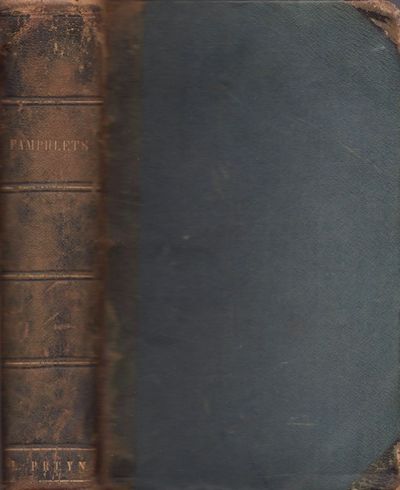 by [Sojourner Truth, John McVickar, Dionysius Lardner, Charles Lyell, Daniel Webster, Josiah Priest, Et al.]
New York, Albany: Various, 1845. Hardcover. Good. Octavo. A sammalband of 12 separate bound pamphlets. Green cloth covered boards with leather corners and spine. Faded title on the spine. Leather is split at the upper joint on the spine. Edge wear to the corners. Light shelf wear to the binding. Front hinge is cracked. The text is in good to very good condition with occasional light foxing, brown spots and toning. All pamphlets trimmed with the exception of the first. Previous owner's name label on the front paste down - Lansing Pruyn. Pyrun name stamped in gilt bottom of the spine. Also, Lansing Pyrun signature is located on the title page of a couple of works. Two pages of hand written titles and author names tipped in before the first work.

Titles and collation of the 12 works as follows:

1. Fanaticism; Its Source and Influence, Illustrated by the Simple Narrative of Isabella in the Case of Matthias, Mr. and Mrs. B. Folger, Mr. Pierson, Mr. Mills, Catherine, Isabella, &c. &c. A Reply to Mr. Stone. by G. Vale (Sojourner Truth). Printed in New York by G. Vale 1835. Issued in two parts this is Part I only. 84 pages. Untrimmed wraps. Sabin 98337

2. Considerations upon the Expediency of Abolishing Damages on Protested Bills of Exchange, and the Effect of Establishing A Reciprocal Exchange with Europe: To which are annexed, the Report Made to the House of Representatives of the United States, March 22, 1826: and An Examination into the Nature and Operation of Bills of Exchange. Author's name not provided but attributed to John McVickar. Printed in New York by Elliott and Palmer 1829. 67 pages.

6. Wealth and Biography of the Wealthy Citizens of New York City, Comprising An Alphabetical Arrangement of Persons Estimated to be Worth 100,000 and Upwards. With the Sums Appended to Each Name; Being Useful to Banks, Merchants, and Others. Sixth Edition, Enlarged to Ten Times the Original Matter, and Now Containing Brief Biographical and Genealogical Notices on the Principal Persons in this Catalogue. Also, A Valuable Table of Statistics. Compiled with Much Care and Published at the Sun Office. New York 1845. 34 pages. Two pencil signatures on the title page.

7. A Copy of the Grants to the Van Rensselaer and Livingston Families Together with A History of the Settlement of Albany. Gathered from Authentic Sources, and Published for the Information of the Renters. By Josiah Priest, author of American Antiquities. Printed in Albany by J. Munsell 1844. 32 pages. Name of Lansing Pruyn written in pencil top of the title page. Howes P 594 (b); Sabin 65486

9. Report on a Direct Route for the Eastern Termination of the Erie Canal, With Estimates of its Expense, and the Comparative Expense of the Proposed Enlargement of the Present Line. By Allan Campbell (Civil Engineer). Albany. Printed by Packard and Van Benthuysen 1836. 36 pages.

10. In Chancery. Before the Chancellor. Augustus James and Elizabeth his wife. vs. William James and Marcia his wife, Henry James, and others. Pruyn & Martin, Solicitors. Albany. Printed by C. Van Benthuysen 1841. Lansing Pruyn name is written at the top of the title page. 71 pages.

11. Proceedings of the National Convention. For the Protection of American Interests, Convened in the City of New-York, April 5, 1841. Published under the Supervision of the Secretary of the Convention, and the Sanction of the Central Committee of the United States Home League. New York. Printed by Greeley & McElrath, Tribune Office 1842. 84 pages. This work has been trimmed very close to the print resulting in minor loss of text.

12. State of New-York. No. 200. In Assembly, April 2, 1841. Report Of the committee on roads and bridges, on the petitions for and the remonstrance's against a bridge across the Hudson river at the city of Albany. No place or printer information provided. 108 pages. Lansing Pryun's name written top of the title page. (Inventory #: 17759)
$1,500.00 add to cart or Buy Direct from Americana Books
Share this item

An Intimate Look at The American Longrifle Its Art and Evolution

by Hansen, David (written and designed by)

Jamestown, New York : Vanguard Publications , 2013
(click for more details about An Intimate Look at The American Longrifle Its Art and Evolution)
View all from this seller>