The Novels of Victor Hugo. 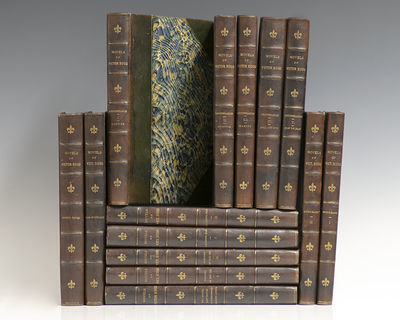 by Hugo, Victor
Philadelphia: W.H. Campion & Co, 1892. Finely bound national edition set of the novels of Victor Hugo. Quarto, 14 volumes bound in three quarters morocco over marbled boards, gilt titles and tooling to the spine, raised gilt bands, top edge gilt, marbled endpapers. One of 1000 copies privately printer for a limited subscriber list. This is set number 205 which has been subscribed for by Mr. William P. Bonbright, Colorado Springs, Co. with his bookplate to the front panel of each volume. Each volume is profusely illustrated with engravings with tissue guards and a table of contents at rear. In near fine condition. An exceptional example. Victor Hugo was a French poet, novelist, and dramatist of the Romantic movement. He is considered one of the greatest and best-known French writers. His best-known works are the novels Les Miserables, 1862, and Notre-Dame de Paris, 1831 (known in English as The Hunchback of Notre-Dame). He produced more than 4,000 drawings, and also earned respect as a campaigner for social causes such as the abolition of capital punishment. (Inventory #: 88108)
$5,000.00 add to cart or Buy Direct from
Raptis Rare Books
Share this item

Barrack-Room Ballads and Other Verses.

London : Methuen and Co , 1892
(click for more details about Barrack-Room Ballads and Other Verses.)

The Maltese Cat: A Polo Game of the ‘Nineties.

Garden City, NY : Doubleday, Doran & Company , 1936
(click for more details about The Maltese Cat: A Polo Game of the ‘Nineties.)
View all from this seller>