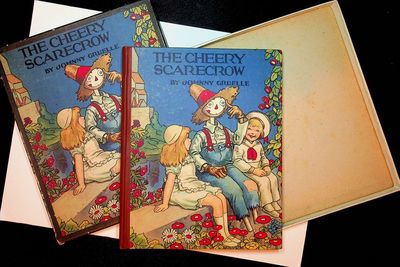 by Gruelle, Johnny
[ Chicago ]: The P. F. Volland Company, 1929. Boards. Near Fine. [6], [7]-39, [1-blank] pages. 6 x 7 1/2 inches. Cloth spine over illustrated paper boards. A near fine copy, in matching box, no dust jacket, as issued. Page 39 is full color advertisement for other P.F. Volland titles. The box, in the style of a stationary box, is in above average condition. It has modest wear at the extremities, with one corner seam separated. An old price penciled on bottom of box, and creasing to the inside of the bottom portion (but not breaking through the rear paper). Boards. We are aware of no definitive way to tell the first edition, first printing of this title. The best bibliography we are aware of is "Raggedy Ann and Johnny Gruelle: A Bibliography of Published Works" by Patricia Hall, Pelican Publishing: 2001. This work documents the complex and ongoing publishing history of Gruelle titles.

Hall confirms that P.F. Volland published the first edition of "The Cheery Scarecrow" in 1929, with no dust jacket, in a matching illustrated box (as here). She further notes that the M.A. Donahue imprint is NOT a first edition, as Donahue purchased the original artwork and plates for the Gruelle Volland titles after Volland stopped publishing books circa 1934 to focus on their greeting card business. Donahue however did issue this title in a dust jacket causing some confusion about whether the Volland printings should have dust jackets (they do not).

Hall notes later Volland printings from 1929-1934, but does not note how to determine those printings. She notes Volland had discontinued it's normal practice of identifying first editions before this title was published. Previously, Volland's first editions were not stated, but a number in italics noted later printings. Our example does not include any "additional printing number" so we've looked for other possible indications of later printings. With many children's books the publisher advertisements include later series titles, possibly indicating a later printing. In this case the advertisement notes two series. "Happy Children Books," with the most recent title listed "Raggedy Ann's Magical Wishes," which we know was issued in 1928. "Sunny Books," with last title listed "Raggedy Ann's Alphabet Book," was issued in 1925.

So, while there is apparently no definitive statement of what constitutes a first edition of this title, there are no indications of later printings for this example, the best the collector can hope for. We would welcome additional information from collectors or dealers of additional scholarship which may shed additional light on this issue. (Inventory #: 27488)
$193.00 add to cart or Buy Direct from Kuenzig Books
Share this item