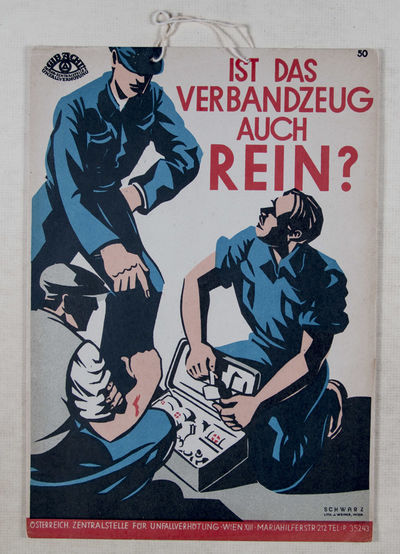 by n/a
Wien: Österreich. Zentralstelle für Unfallverhütung, 1930. Original document. Loose leaf. vg. Quarto (11 3/4 x 8 1/4"). Two Broadsides with original color lithographs by J. Weiner, printed in red, blue, black and gray to heavy card stock. Two broadsides of a larger series published by the Austrian Central Office for Accident Prevention. Both of the present broadsides printed by the noted and award-winning lithography company J. Weiner, Wien. Originally founded in Vienna, J. Weiner's son Joseph Weiner opened a branch in 1889 in Paris and in 1892 offices were established in London. The successful run of Weiners Ltd. in London included well known posters for the Brandon Thomas farce "Charley's Aunt." 1. "Wunden Nie Vernachlässigen..." (Never Neglect Wounds. Dress Immediately) warns of the potentially devastating consequences of neglecting even the smallest wound. It features two figures one with a wound below his knee and another on crutches with an amputated leg, featuring dressing of the wound encircled in red. Lithograph by J. Weiner, Wien printed to at bottom edge. Above that the name and address with telephone number of the government office. 2. "Ist das Verbandszeug auch rein?" (Is The Dressing Material Clean?) shows a group of three men in overalls, one of the kneeling with an opened first-aid box with a second man crouching in front of him featuring a wound at his arm, and the third man standing pointing at the first-aid box. Address with telephone number of the government office printed in white to red, quarter inch field at bottom edge with Schwarz Lith. J. Weiner, Wien, printed at right edge just above the address. A designed logo "Pay attention (Gib Acht?)" with name of government office printed at upper left edge to both broadsides. The No. 9 is printed in white to a gray backdrop on the first, the No. 50 printed in black to a tan backdrop on the second broadside. Both broadsides have two holes each at the top with strings attached to be placed in workplaces as educational tools. Text in German. Light wear along edges and lightly rubbed on versos. (Inventory #: 46123)
$375.00 add to cart or Buy Direct from
Eric Chaim Kline Bookseller
Share this item