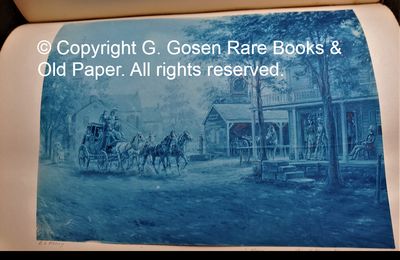 by Earle, Alice Morse
[Presentation and Association Copy, Extra-Illustrated by E. L. HENRY.] Earle, Alice Morse STAGE-COACH AND TAVERN-DAYS. The Macmillian Company, New York: 1905. Presumed fourth printing, 449 pages, 23cm, extra-illustrated presentation copy, inscribed and signed by the painter-book illustrator, E(dward) L(amson) Henry (1841-1919): "To Mrs Marie L. Hewlett, E. L. Henry April 1913." Also, the five full-page illustrations reproducing Henry's paintings are signed by him, as well as the publisher's frontispiece, which is also retouched; in addition, five photographic prints of Henry's paintings have been pasted in, four are signed and hand-colored by him. They are: at p.173 untrimmed, untitled, and unsigned, showing the original painting tacked to the easel; at p. 178 retouched with graphite and watercolor, titled and signed, "July 1760 A Reception at 'Stenton' near Phila. The Home of James Logan, Secty. to Wm. Penn"; at p. 243 retouched with graphite and watercolor, titled and signed, "Waiting for the Ferryman"; at p. 255 retouched with graphite and watercolor, titled and signed, "The Floating Bridge Across the Schuylkill, Phila. and the 'Stage Wagon' of 1790"; and, at p. 324 a retouched cyanotype, titled and signed "Here Comes the Stage." Also, the front fly-leaf is signed and dated by noted New Jersey photographer-historian Elizabeth G.C. Menzies, a later owner, in November 1966. Top edge gilt, beige cloth, front cover stamped with orange and black replica of an old inn sign. Spine faded and one corner bumped, but still a beautiful and tight copy, one believed to have been especially prepared for Mrs. Hewlett by E. L. Henry. (Inventory #: 333)
$1,850.00 add to cart Available from
Gosen Rare Books
Share this item

The Hudson River Map from New York Bay to the Head of the Tide W Containing Names of Streams, Islands and Heights of Mountains According to the latest Coast Survey, Also the Names of Prominent Residences, Historic Land Marks, the Reaches of the Hudson and Old Indian Names. Published by Wm. F. Link. New York Central and Hudson River R.R. Route. Copyrighted by Wm. F. Link. Price 25 Cts.

An Essay on the Genius of George Cruikshank. Reprinted verbatim from the “Westminster Review” with a Prefatory Note on Thackeray as an Artist and Art-Critic by W. E. Church. Various manuscript letters and signatures. Extra-illustrated.

London : George Redway , 1884 and various
(click for more details about An Essay on the Genius of George Cruikshank. Reprinted verbatim from the “Westminster Review” with a Prefatory Note on Thackeray as an Artist and Art-Critic by W. E. Church. Various manuscript letters and signatures. Extra-illustrated.)
View all from this seller>