Provokatie [Provocation], nos. 1-17. Includes the original edition of Provokatie no. 3, featuring the image of Prince Bernhard of the Netherlands, later censored and replaced by red pencil annotation "censuur. 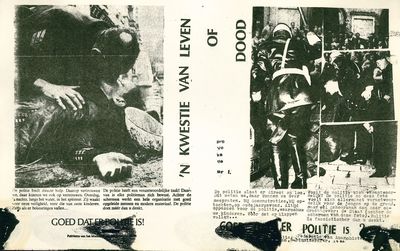 Amsterdam: Provo, 1965-1966. Various sizes and formats, mostly 33.8 × 21.5 cm, some smaller. Xeroxed text and image, as well as mimeographed typescript. Very good. Complete series of these mimeographed and xerox-copied Provo tracts, distributed individually as well as part of the journal Provo (folded and inserted). The third issue, which features the image of Prince Bernhard of the Netherlands, was self-censured by the group and replaced with the red "censuur." Our set includes both versions, the censored and uncensored version. Number seven was officially censored and confiscated, but is also included here.

As of August 2019, outside the Netherlands KVK and OCLC show the holdings at the BnF, Michigan, and Yale. (Inventory #: 50148)
$2,000.00 add to cart or Buy Direct from
Bernett Penka Rare Books
Share this item