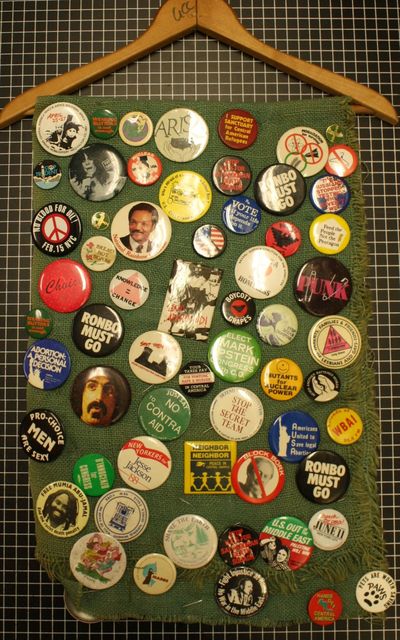 Group of 1960's-1980's mostly political buttons, approximately 120 total, a few duplicates, grouped on a hanging piece of woven green cloth, representing a wide range of groups and causes affiliated with gay rights, women's rights, US/Cuba Friendshipment, the war in the Middle East, abortion rights, pacifism, civil unrest in Latin America, apartheid, and environmentalism, among others. Mostly coated paper, plastic, and metal, a couple of enameled pins. Some with slight rusting to backs ro slight fading of imagery, very minor soiling, overall very good condition. Buttons range in diameter, approx. 3/4 inch to 2-1/2 inches. Various, 1960's-1980's. A visually striking collection from an important period in American political and activist history.Some of the buttons included in this collection are:- "Free Mumia Abu-Jamal - End the racist death penalty, National People's Campaign"- "MADRE - Joining hands & hearts with the women & children of Central America & the Caribbean"- "SHARE THE EARTH - Trans-Species Unlimited"- "Fight Injustice at Home - No War in the Middle East, Coalition to Stop U.S. Intervention in the Middle East"- "Stop U.S. $ for Salvadoran Death Squads"- "Americans United to Save legal Abortion"- "Shut Them Down - Mobilization for Survival"- "Pro-Choice Men are Sexy"- "Ronbo Must Go"- "Stop Ocean Dumping"- "Who's Afraid of a Little Yellow School Bus? - U.S. - Cuba Friendshipment"- "Feed the People, Not the Pentagon"- "Heal aids with loving kindness"- "El Salvador is Spanish for Viet Nam"- "No one is free, when others are oppressed"- "Boycott Grapes"- "BUSHED but not defeated!" (Inventory #: 50268)
$1,500.00 add to cart or Buy Direct from
Bernett Penka Rare Books
Share this item