COMMONWEALTH OF MASSACHUSETTS. By His Excellency James Bowdoin, Esq. Governour of the Commonwealth of Massachusetts. A Proclamation 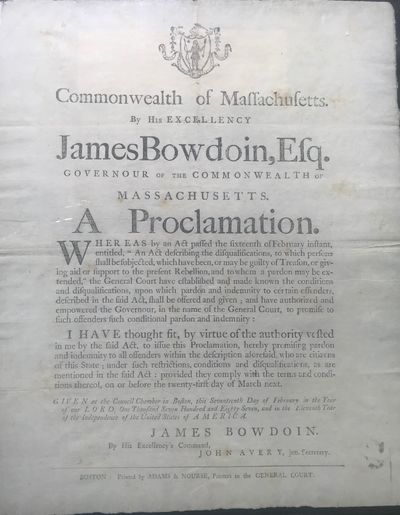 by Bowdoin, James
Boston: Printed by Adams & Nourse, Printers to the General Court, 1787. Broadside. 39 1/2 x 32 1/2 cm. Illus. relief cut. Signed in type by Gov. James Bowdoin, and by John Avery, Secretary. Old fold lines, a few tiny holes, else a very good example, encapsulated. "Wheras by an Act passed the sixteenth of February instant, entitled, "An Act describing the diqualifications, to which persons shall be subjected, which have been, or may be guilty of Treason, or giving aid or support to the present Rebellion, and to whom a pardon may be extended," the General Court has established and made known the conditions and disqualifacations, upon which pardon and indemnity to certain offenders, described in said Act, shall be offered and given; ...." This of course refers to Shay's Rebellion, an armed uprising in Massachusetts named for Revolutionary War veteran Daniel Shay who led 4,000 rebels to fight against what they perceived as economic injustices. Although the rebellion was quashed in time, it led to lasting changes as it brought to the fore the weakness of the federal government to suppress rebellions under the Articles of Confederation and led to the Constitutional Convention and a stronger central government. OCLC: Williams. ESTC: AAS, Harvard Univ., Huntington, MHS, LC. (Inventory #: 64326)
$4,500.00 add to cart or Buy Direct from
Bartleby's Books
Share this item

CERTIFYING ANDREW REULONG'S RIGHTS TO ONE LEAGUE AND ONE LABOR OF LAND IN THE COUNTY OF JASPER, REPUBLIC OF TEXAS, 1839

by Republic of Texas


(click for more details about CERTIFYING ANDREW REULONG'S RIGHTS TO ONE LEAGUE AND ONE LABOR OF LAND IN THE COUNTY OF JASPER, REPUBLIC OF TEXAS, 1839)

TABLES OF DISCOUNT ON BRITISH STERLING: Exhibiting at One Reference the Net Proceeds of Every Sum by the Progession of One Penny from Sixpence to Ten Shillings, .....

Boston, [MA] : Josiah Loring, No. 136, Washington Street; Folsom, Wells, and Thurston, Printers, Cambridge , 1840
(click for more details about TABLES OF DISCOUNT ON BRITISH STERLING: Exhibiting at One Reference the Net Proceeds of Every Sum by the Progession of One Penny from Sixpence to Ten Shillings, .....)
View all from this seller>