APPEALING TO PRESIDENT JAMES MONROE FOR ASSISTANCE in rectifying a perceived injustice involving a potential promotion in the U.S. Navy, in a manuscript letter (secretarial), signed Dec. 17, 1818, with a response by Monroe, in his hand and initialed by him, on the verso of the integral leaf 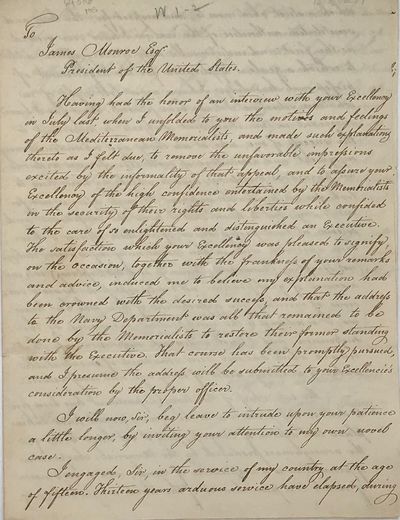 by [Monroe, James (1858-1831; 5th President of the United States)] Jones, Thomas ap Catesby (1790-1858; U.S. naval officer, 1805-1858)
(Washington City, 1818. 4to. Three-pages, approximately 600 words; the Monroe response approximately 80 words (in full below). Folded for mailing; otherwise fine in all respects. Lt. Jones, a Naval officer, prefaces his case with a reminder to President Monroe that they had met in July when Jones reported on "the motives and feelings of the Mediterranean Memorialists," referring to the September, 1816, dispute between Commodore Oliver H. Perry and one of his officers, Capt. John Heath, who commanded a detachment of Marines aboard the U.S. frigate Java in the Mediterranean and the resulting court martial convened aboard ship in December of that year. The subaltern officers aboard ship, including Jones, signed a petition protesting the actions of Com. Perry toward Capt. Heath. This resulted in a request by their superior officers that all the subalterns who had signed the petition be recalled to the United States. [see: "American State Papers," 15th Cong., 1st session, 1818, Naval Affairs, pp.453-6]. Jones, who had begun service in the Navy at the age of 15, appeals to the President regarding the resulting suspension of his promotion without the chance to defend himself in the more formal setting of a court martial: "How hard is my case! Condemned without trial; even without a hearing. To submit was my duty. To appeal is my right." Monroe's response, some 80 words, is written on the verso of the second integral leaf, in full: "Lt. Jones of the navy. Will it not be proper to make some nominations of the young men who have made the atonement required? The public attention was drawn to the object & feeling much excited which are reasons for terminating the affr. in favor of this young man many members have spoken to me. Still I would wish that the particular can be taken up by itself. JM / If any nomination is made, it had better be added to those going in." A native of Virginia, Thomas ap Catesby Jones continued to serve in the U.S. Navy until his death in 1858. He saw service in the War of 1812, including in the New Orleans campaign, and the Mexican War, and commanded the Pacific Squadron in the 1840s. He was by many accounts a controversial figure who, in his later naval career, meted out harsh discipline to his crew. Herman Melville, who served aboard Jones's flagship the "United States" in the Pacific is believed to have modeled the captain of "White Jacket" and "Commodore J" in "Moby Dick" on Jones. " In 1850, in a politically charged court-martial shortly after White Jacket was published, Jones was found guilty on three counts mostly related to 'oppression' of junior officers and relieved of command for several years" (Wikipedia). (Inventory #: 64316)
$3,500.00 add to cart or Buy Direct from
Bartleby's Books
Share this item