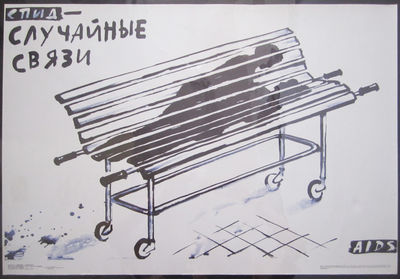 by Nemkova, G. and Kamenskikh, G.
Moskva (Moscow): Izdatelstvo "Plakat", 1990. First Edition. Very good. Poster, color offset lithograph; 19 x 26 3/4; very minor wear to top and bottom edges; a few light creases; two small, very minor abrasions to verso; very good to near fine condition. In Russian and English.An uncommon anti-AIDS poster, it was published at a time, when the Soviet Union's dissolution was nearly complete and the HIV epidemic was rapidly picking up speed. Allegedly, prior to the first officially-documented case of HIV in 1987, the Soviet Government had steadfastly denied having any infected individuals on its theritory. Doctors were pressured to misdiagnose patients and virtualy no public warnings were issued. No official data was collected on the at-risk groups, ie. drug users, homosexuals, sex workers, etc. In the early 1990s, awareness began finally creeping in. The poster, rendered in grim blue and black shades, depicted a stylized park bench turning into a gurney, with the silhouettes of a lying couple on top of it. OCLC lists 2 copies at US institutions - NLM and Yale; none other in the trade. (Inventory #: 002494)
$450.00 add to cart Available from ZH Books
Share this item
ZH Books
Offered by

National Birth-Night Ball. Under the Special Patronage of Mrs. Polk, Mrs. Madison, Mrs. Adams, Mrs. Hamilton. The Honor of [ ] Company is Requested at Jackson Hall, on the Evening of the 22d February, 1848