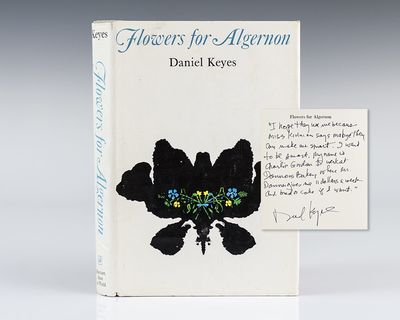 by Keyes, Daniel
New York: Harcourt, Brace & World, Inc, 1966. First edition of the author's Hugo and Nebula Award-winning novel, basis for the Oscar award-winning movie adaptation Charly. Octavo, original cloth. Signed by the author on the half-title page, who has transcribed the opening paragraph as follows, "I hope they use me becaus Miss Kinnian says mabye My name is Charlie Gordon I werk in Donner bakery gives me 11 dollers a week and bred or cake if I want. Daniel Keyes." Additionally signed again by the author on the title page. Fine in a near fine dust jacket with light wear to the extremities. Jacket design by Carl Smith. An exceptional inscription. With more than five million copies sold, Flowers for Algernon is the beloved, classic story of a mentally disabled man whose experimental quest for intelligence mirrors that of Algernon, an extraordinary lab mouse. In poignant diary entries, Charlie tells how a brain operation increases his IQ and changes his life. As a 1959 novella it won a Hugo Award; the 1966 novel-length expansion won a Nebula. The Oscar-winning movie adaptation Charly (1968) also spawned a 1980 Broadway musical. (Inventory #: 7304)
$7,200.00 add to cart or Buy Direct from
Raptis Rare Books
Share this item

The Copernican Revolution. Planetary Astronomy in the Development of Western Thought.

Cambridge, MA : Harvard University Press , 1957
(click for more details about The Copernican Revolution. Planetary Astronomy in the Development of Western Thought.)
View all from this seller>