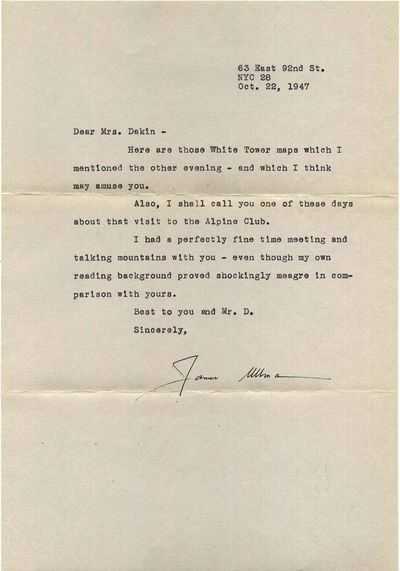 by Ullman, James Ramsey
New York, NY: not published, 1947. Autograph. Very good condition. Unbound. Signed by Author(s). First Edition. Quarto (4to). One page typed letter signed by James Ramsey Ullman, author of "The White Tower". In this letter JRU refers to "White Tower maps" stating that they are enclosed with the letter. The letter is written to a Mrs. Roger Dakin of NYC who had apparently invited JRU to visit the Alpine Club; the original mailing envelope is included. Indeed, there are two one-page maps, folded into thirds, both of which are signed by JRU. They are printed on slightly acidic paper which has toned, and the folds are brittle with a few tears. They are reproductions of simple hand-drawn sketch maps, printed by a simple method of reproduction-- most likely mimeograph. Both maps share the same title "Map of the imaginary Weissturm and the route taken by the six characters who attempted to climb it. Reproduced from the original pencil sketch, drawn by James Ramsey Ullman, and used by him in writing "The White Tower". The maps show a similar view, except one is a close up of the peak and ascent field including the east and south faces. "The White Tower" was the fourth best-selling novel in the US in 1945 and was reprinted as an Armed Services Edition. RKO Radio Pictures made a film in 1950 based on the book, under the direction of Ted Tetzlaff and starring Glenn Ford, Alida Valli, Claude Rains, Lloyd Bridges, Cedric Hardwicke, and Oskar Homolka.. (Inventory #: 019374)
$475.00 add to cart or Buy Direct from
Kurt Gippert Bookseller
Share this item
Kurt Gippert Bookseller
Offered by