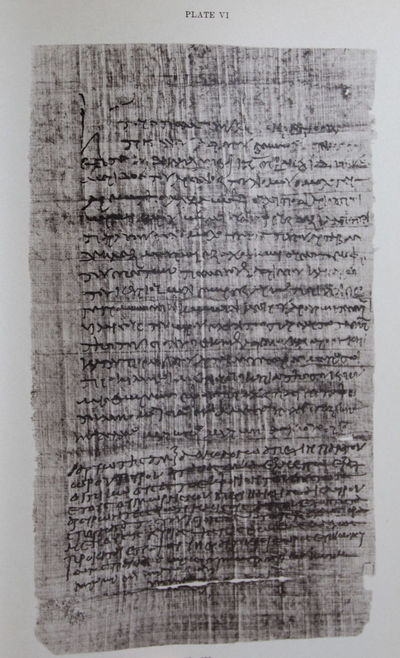 by Winter, John Garrett (Ed.)
Ann Arbor: University of Michigan Press, 1936. First edition. Quarto (11 x 8"). xviii, 390, [2]pp, vii leaves (Plates), 4pp. Original olive cloth, with gold lettering to spine. This volume represents the collective enterprise of eight scholars connected with the University of Michigan. Of the 91 papyri which comprise its contents (numbered 131-221 in the Michigan series), 32 had previously appeared in various periodicals, their republication being considered desirable as a means of promoting facility of reference and citation and as affording an opportunity to record important revisions. The papyri, all but a few of which are from the Roman period, are arranged according to subject under the following headings: Biblical Fragments, Classical Fragments, Mathematical Fragments, Astrological Fragments, Horoscopes, Magic, Libelli of the Decian Persecution, Official Documents, Petitions, Taxation, Contracts, Agricultural Account, and Private Correspondence. (From the Publishers) Ex-library copy with bookplate on inside of front cover, library pocket on inside of back cover, and stamp at top and bottom edges. Some moderate soiling / discoloration to front cover. Binding in overall good, interior in very good condition. (Inventory #: 46176)
$95.00 add to cart or Buy Direct from
Eric Chaim Kline Bookseller
Share this item