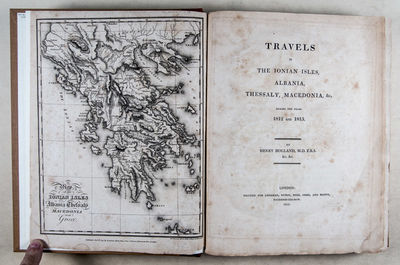 by Holland, Henry (Text and Illustrations by); George Cooke, John Byrne, Robert Sands, John Le Keux, and Elizabeth Byrne (Plates engraved by)
London: Longman, Hurst, Rees, Orme, and Brown, 1815. First edition. Hardcover. g to vg. Large quarto (11 1/4 x 9"). x, [2], 551, [1]pp. Modern half brown morocco over brick cloth, with gold lettering to spine. Raised bands. Large engraved frontispiece map. "Sir Henry Holland (1788-1873) was a passionate and intrepid traveller from a young age. In addition to a distinguished career as court physician - first to Caroline of Brunswick, then to Queen Victoria and Prince Albert - he sought to keep two months of each year free to travel. His trip to Greece formed part of a European tour that Holland undertook in 1812-13 after having taken his medical degree at Edinburgh. Holland focuses on the lesser-known islands and parts of Macedonia and Albania, and gives a unique first-hand account of the Albanian vizier Ali Pasha (1740-1822), whom he befriended while visiting his court. The publication of Holland's travelogue in 1815 enhanced his reputation greatly and he was elected Fellow of the Royal Society that year. The book contributed to the early nineteenth-century fascination with Greece that would later lead Lord Byron to join the Greek War of Independence." (From Cambridge University Press). This work is complete with its thirteen engraved plates (including the frontispiece map). The plates are engraved by George Cooke, John Byrne, Robert Sands, John Le Keux, and Elizabeth Byrne after illustrations by the author. Minor to moderate foxing and age-toning throughout. Binding in overall very good, interior in good to good+ condition. (Inventory #: 46143)
$950.00 add to cart or Buy Direct from
Eric Chaim Kline Bookseller
Share this item