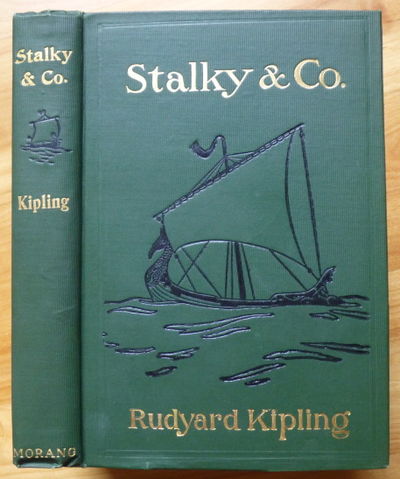 by Kipling, Rudyard
1899. [the Publisher to Major Pond] Toronto: George N. Morang & Co., 1899. Original dark green cloth with Viking longboat design in black. First Canadian Edition -- technically, the Canadian issue of the first American edition, which was published in this binding by Doubleday & McClure ten days before Macmillan's UK edition. These nine hilarious tales of school life (of the mischievous Stalky, Beetle and McTurk) are based on Kipling's own days at the United Services College. Included are eight illustrations by L. Raven Hill, which are not in the UK edition. American sheets were bound up with a Morang title leaf, and the binding was altered only to read "MORANG" at the foot of the spine (some Canadian copies were put up in red wrappers). One little oddity of this Canadian edition is that Kipling's prefatory poem here follows the Contents and Illustrations leaves, whereas in the American edition (and in the UK edition), the poem precedes those leaves. This is a bright copy, fine except for very light rubbing at the corners. Richards A144 (note). Provenance: this is an inscribed presentation copy from the publisher to the American literary agent and lecture-tour impresario, ["Major"] James P. Pond. The front free endpaper bears the inked inscription "Mr J. B. Pond With the kind regards of the Publishers Geo N. Morang & Co.", and the opposing paste-down bears Pond's less-than-modest bookplate. Pond was the "major" American literary agent of that era. (Inventory #: 14429)
$225.00 add to cart or Buy Direct from
Sumner & Stillman
Share this item