Natural History and Antiquities of Selborne, The 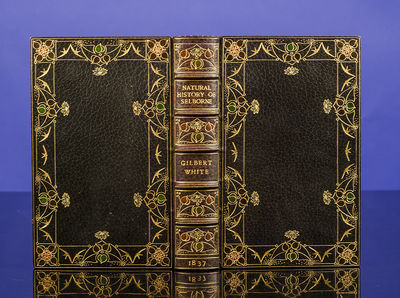 by KELLIEGRAM BINDING; WHITE, Gilbert
London: Printed [at the Chiswick Press] for J. and A. Arch; Longman and Co.,[et al], 1837. A Superb Art Nouveau Binding

[KELLIEGRAM BINDING]. WHITE, Gilbert. The Natural History and Antiquities of Selborne. With the Naturalist's Calendar; and Miscellaneous Observations, extracted from his papers. London: Printed [at the Chiswick Press] for J. and A. Arch; Longman and Co.,[et al], [1837].

A New Edition; with notes , by Edward Turner Bennett and others. Original cloth spine bound in at end.

With numerous engravings of flora, fauna, and landscapes in the text. Verso of front free endpaper with rectangular bookplate of Thos. D. Murphy. A fine copy.

This is a lovely copy of White's beloved account of the wonders of nature, offered in a very pleasing pictorial binding from the firm that is best known for that kind of work. First published in 1789, Gilbert White's beloved account of the wonders of nature, which he wished to inspire readers to observe in their own backyards, "is open to everyone, for everyone has observed much of what it describes. Writer and reader each share the inheritance of the natural world, and delight in what is given, so that Selbourne becomes an expression of universal thanksgiving, treasured by all." (DNB) The present edition is in a binding that reflects the passions of the writer's life. Kelly & Sons had one of the longest histories in the London binding trade, having been founded in 1770 by John Kellie, as the name was then spelled. The firm was continued by successive members of the family into the 1930s. Though the bindery would never be considered among the two or three outstanding workshops, it produced consistently high quality bindings and was notably innovative in its designs. Our cover design is animated and unusual, the gilt birds in flight adding a charming note of whimsy to the graceful Art Nouveau design. As with many Kelliegram bindings, pictorial inlays are prominently featured - though here they are atypically large and found inside, rather than on, the covers. The doublures represent two things dear to White's heart: his Selbourne home, "The Wakes," and a small country church like the one where he served as a perpetual curate, forsaking a more brilliant career in the church or at Oxford in order to remain in the place that he loved. The doublure scenes employ at least ten different consonant colors of morocco and much incising to give a fine level of detail. (Inventory #: 04728)
$6,000.00 add to cart or Buy Direct from
David Brass Rare Books
Share this item

London: Chatto and Windus, 1881
(click for more details about Our Old Country Towns)
View all from this seller>