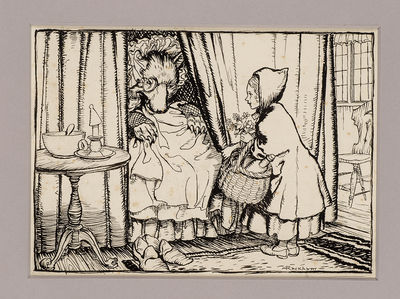 RACKHAM, Arthur, artist. "Put the cake and the little pot of butter upon the bread-bin and come and lie down with me." [Sussex, 1933].

The wolf is dressed in a mop cap, wearing glasses and hiding behind the curtains of the bed. Grandmother's slippers are sitting neatly on the floor by the bed and next to the bed there is a candle and a bowl on a small table. Little Riding Hood is dressed in her riding hood holding some flowers she has picked for her Grandmother and carrying a large basket with the pot of butter sticking out of it.

As always, Rackham has created a moment in time - one which is universally recognized.

"Little Red Riding Hood" is a European fairy tale about a young girl and a Big Bad Wolf. Its origins can be traced back to the 10th century to several European folk tales, including one from Italy called The False Grandmother (Italian: La finta nonna), later written among others by Italo Calvino in the Italian Folk Tales collection. The best known versions were written by Charles Perrault and then later by Jacob and Wilhelm Grimm. Arthur Rackham chose the original Charles Perrault version.

The Moral of the Story... Children, especially attractive, well bred young ladies, should never talk to strangers, for if they should do so, they may well provide dinner for a wolf. (Inventory #: 04706)
$7,500.00 add to cart or Buy Direct from
David Brass Rare Books
Share this item