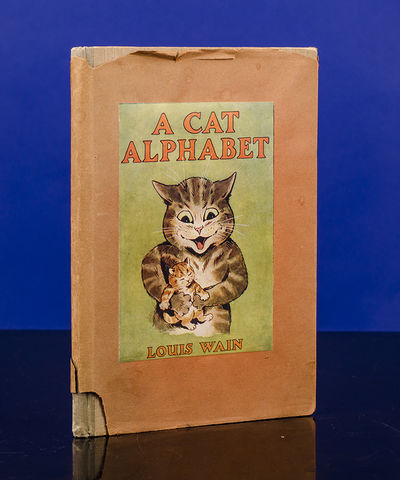 This first American edition appears to be unrecorded. The title-page states "Printed in Scotland" and the final leaf states" Printed in Great Britain/At the Villafield Press, Glasgow, Scotland". The sheets (with the exception of the title-page) appear to be identical to the London edition. The binding differs only in the color of the cloth spine, which is orange on the London edition.

A quite spectacular copy of this exceptionally rare title - we have never seen nor heard of another example in the original pictorial dust jacket.

Only three copies have come to auction within the last fifty years (all with the London imprint). OCLC records just one copy of the London edition in libraries and institutions worldwide (Princeton University (NJ, USA).

At the end of the last century, Louis Wain (1860-1939), the Edwardian cat artist who went mad, became a household name as an illustrator of cats, whom he depicted in all sorts of activities, from skating and playing cricket to driving motor cars, attending dances, and playing musical instruments.

"He invented a cat style, a cat society, a whole cat world. English cats that do not look like Louis Wain cats are ashamed of themselves" (H.G. Wells).

"From 1883, Wain began to draw cats as they had never been drawn before, cats in humorous guises, in human situations, but always beautifully handled - although he was sometimes forced to draw dogs before he became well-known!" (Houfe, The Dictionary of British Book Illustrators and Caricaturists 1800-1914)