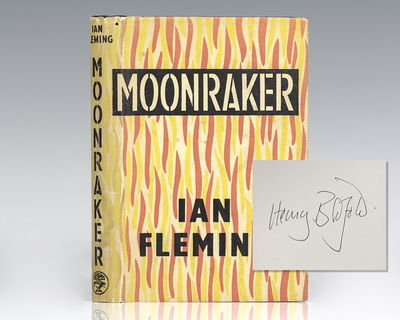 by Fleming, Ian
London: Jonathan Cape, 1955. First edition, first issue with "shoo" for "shoot" on page 10 of the third novel in the James Bond series and what many critics to be his finest. Octavo, original black cloth. Signed by Henry Blofeld on front free endpaper. Blofeld is the son of Thomas Robert Calthorpe Blofeld (1903-1986) who attended Eton with Fleming and whose name is believed to be the inspiration for the supervillain Ernst Stavro Blofeld. Near fine in a very good price-clipped dust jacket with the spine panel bright and with light wear to the spine extremities. Jacket design by Kenneth Lewis. A nice association. Noël Coward read Moonraker in proof in Jamaica and pronounced, ‘It is the best thing Fleming has done yet, very exciting His observation is extraordinary and his talent for description vivid" (Lycett, 253-54). It was later adapted to film in 1979, directed by Lewis Gilbert and starring Roger Moore as James Bond. (Inventory #: 107324)
$12,500.00 add to cart or Buy Direct from
Raptis Rare Books
Share this item