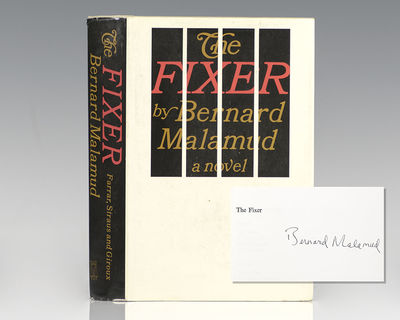 by Malamud, Bernard
New York: Farrar, Straus and Giroux, 1966. First edition of the author's fourth novel, which went on to win the National Book Award and the Pulitzer Prize. Octavo, original cloth. Signed by Bernard Malamud on the title page. Fine in a near fine dust jacket that shows some light wear. Jacket design by Janet Halverson. First published in 1966, The Fixer was described for its fashionable prose by Elizabeth Harding at Vogue as "[b]rilliant [andharrowing . . . Historical reality combined with fictional skill and beauty of a high order make [it] a novel of startling importance." And Jonathan Safran Foer, author of Everything is Illuminated, "[w]hat makes it a great book, above and beyond its glowing goodness, has to do with something else altogether: its necessity...This novel, like all great novels reminds us that we must do something." The Fixer "deserves to rank alongside the great Jewish-American novels of Saul Bellow and Philip Roth" (The Independent). It was the basis for the 1968 film directed by John Frankenheimer, starring Alan Bates. (Inventory #: 106959)
$975.00 add to cart or Buy Direct from
Raptis Rare Books
Share this item