One Flew Over the Cuckoo’s Nest. 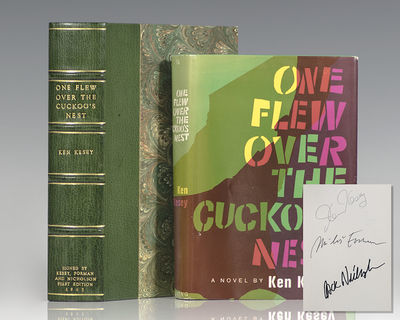 by Kesey, Ken
New York: The Viking Press, 1962. First edition of the author's classic first book. Octavo, original cloth. Signed by Ken Kesey, Milos Forman and Jack Nicholson. Fine in a near fine first-issue dust jacket. Jacket design by Paul Bacon. Housed in a custom half morocco clamshell box. Most rare and desirable signed by these three contributors. Published in February 1962, One Flew Over the Cuckoo's Nest was a great critical and commercial success. Over the subsequent decades the book's reputation and readership swelled as millions recognized Kesey's psychiatric ward as a not-so-fantastic metaphor for a modern world in which bureaucracy and technology combine to diminish humanity, individuality and diversity. Adapted to the stage in 1963, with Kirk Douglas in the lead, and was the basis for the highly successful 1975 film directed by Milos Forman and starring Jack Nicholson. Considered to be one of the greatest films ever made, One Flew Over the Cuckoo's Nest ranks number 33 on the American Film Institute's 100 Years, 100 Movies list. It was the second to win all five major Academy Awards (Best Picture, Actor in Lead Role, Actress in Lead Role, Director, and Screenplay) following It Happened One Night in 1934, an accomplishment not repeated until 1991 by The Silence of the Lambs. It also won numerous Golden Globe and BAFTA Awards. (Inventory #: 107650)
$20,000.00 add to cart or Buy Direct from
Raptis Rare Books
Share this item