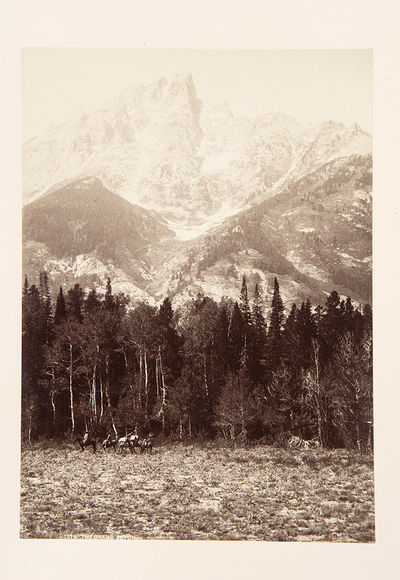 Jackson began his career in photography in 1858, working as a retouching artist in a studio in Troy, N.Y. In the 1860s, after serving briefly in the Union Army, he worked at several studios in Vermont before moving to Omaha, Nebraska in 1867 where he established his own studio. He worked on an extensive series of views for the Union Pacific Railroad, which earned him enough notice to be recruited by Ferdinand Hayden for the U.S. Geological Survey team. With the Survey, Jackson explored and photographed vast areas of the West, including the Tetons and Yellowstone and parts of Colorado, Montana, Utah, Nevada, Arizona and New Mexico. Jackson's artistic growth as a landscape photographer evolved and quickly matured when he was hired by Hayden. Influenced by Thomas Moran, a painter on the survey, and photographers C. R. Savage and A. J. Russell, Jackson absorbed the aesthetic of romantic engagement of the western landscape and development and colonization of the Territories. However this was countered by the inherent drama of being the first to photograph many high mountain peaks, valleys and western scenes in a more detailed and topographic style. In 1879, his work with the Survey at an end, he set up a commercial photography studio in Denver, marketing landscape photographs of the West both for his own purposes and on behalf of various railroads. The present image dates back to Jackson's time in Denver. Jackson's photographs "took on added significance in 1890 when the census revealed that the frontier had vanished -- Americans had settled virtually everywhere in the transcontinental realm. All that remained of the Old West -- that untamed expanse inhabited only by free-roaming Indian tribes, audacious mountain men, and wild animals -- were the dusty memoirs of those who had lived during that epic era and the photos of William Henry Jackson" (Waitley).