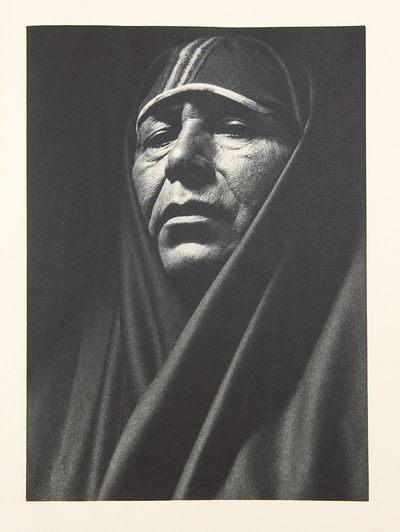 From an edition of 108 numbered copies signed by the author and the photographer, containing magnificent photographs by Ansel Adams.

Possibly the most famous of modern photographic works on the West, Taos Pueblo was a collaboration between the young photographer, Ansel Adams, and one of the most evocative writers on the Southwest, Mary Austin. An elegant design by the Grabhorn Press provides a counterpoint to Adams' photographs of the adobe Pueblo. The book distilled the romance and naturalism that many Americans found in the Indian pueblos of New Mexico, and defined the style that was to make Adams the most popular of photographers of the American West. "It was at Taos and Santa Fe that Ansel Adams first saw the Southwest. The time was the spring of 1927... His visit resulted in a Grabhorn Press book now of legendary rarity. It includes Ansel Adams' photographs and Mary Austin's essay on Taos Pueblo. Genius has never been more happily wed. Nowhere else did she write prose of such precise and poetical authority ... Their Taos Pueblo is a true and beautiful book by two consummate artists" (Ansel Adams: Photographs of the Southwest, 1970, p. xxv). Produced in a small edition, the book is difficult to obtain today. This example is signed by both Austin and Adams and is in beautiful condition. One of the greatest books produced by the Grabhorn Press and featuring beautiful photographs by Ansel Adams, it is a landmark of American photographic depiction of the Southwest.