ORGANIZATION, OBJECTS, AND PLAN OF OPERATIONS, OF THE EMIGRANT AID COMPANY: ALSO A DESCRIPTION OF KANZAS [sic]. FOR THE INFORMATION OF EMIGRANTS 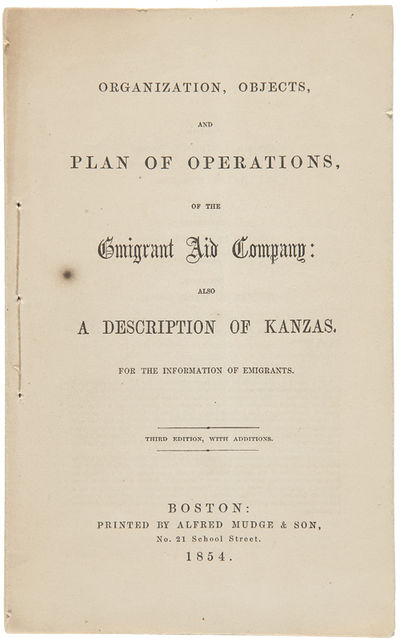 by [Kansas]: [Webb, Thomas H.
Boston: Printed by Alfred Mudge & So, 1854. 24,4pp. Gathered signatures, stitched as issued. Faint vertical crease. A few singular spots of foxing. Near fine. Third edition, with additions. "The Massachusetts Emigrant Aid Company was one of a number of organizations formed in the New England states to foster settlement of the newly organized Kansas Territory by northerners who would be opposed to slavery and would vote to exclude that 'Peculiar Institution' from the proposed state constitution" - Wagner-Camp. This edition outlines the Company's objectives, briefly describes the natural resources of Kansas, and includes George S. Parks' "Notes of a Trip Up Kanzas River, Including Observations on the Soil, Climate, Scenery, &c.," which first appeared in the Kansas "Herald of Freedom." With the four-page "Form of Constitution and By-Laws for Auxiliary Societies," as called for. WAGNER-CAMP 240c:3. HOWES W192. SABIN 22474. (Inventory #: WRCAM55093)
$450.00 add to cart or Buy Direct from
William Reese Co. - Americana
Share this item