NOTES ON THE STATE OF VIRGINIA 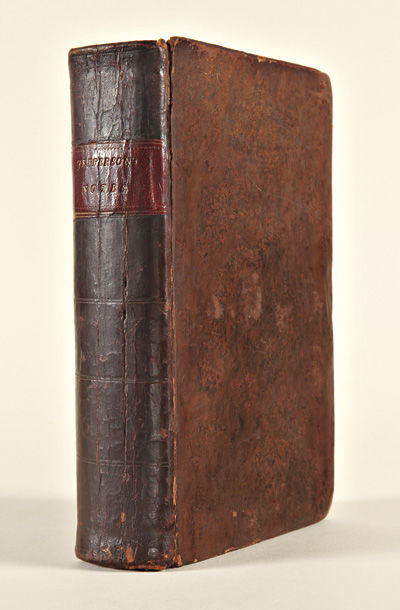 by Jefferson, Thomas
Philadelphia: R.T. Rawle, 1801. [4],436 [i.e. 439],[1],56pp. plus three maps (one folding), folding plate, folding table, and frontispiece portrait. Contemporary speckled calf, gilt leather label. Spine head chipped, some splits to spine leather, front joint loosening. Offsetting on the folding map; long closed tear and small area of left edge of folding map repaired on verso. Uneven toning to text, some foxing. About very good. In a half morocco and cloth slipcase and cloth chemise, spine gilt. One of the handsomest American editions of Jefferson, and the first issued after his accession to the presidency, noted on the title as the "First Hot-Pressed Edition." The portrait, pictured and described in Cunningham's THE IMAGE OF THOMAS JEFFERSON IN THE PUBLIC EYE..., was engraved by William Harrison, Jr. after a print by Mathew Carey. It is one of the relatively few engraved images of Jefferson to appear in his lifetime. This edition adds Jefferson's famous first inaugural address ("we are all Republicans, we are all Federalists"). An appendix adds his correspondence relating to the Logan massacre, a horrific frontier tale of the murder of a friendly Indian family in southwest Virginia during Lord Dunmore's War in 1774.

This copy also contains a large folding map, A MAP OF THE STATE OF VIRGINIA, described under the title as "Compiled for Rawle's Hot- pressed Edition of Jefferson's Notes." The folding plate is "A View of the Natural Bridge in Virginia." HOWES J78. CLARK I:262. Noble E. Cunningham, Jr., THE IMAGE OF THOMAS JEFFERSON IN THE PUBLIC EYE, p.51. REESE, FEDERAL HUNDRED 6 (ref). (Inventory #: WRCAM52194B)
$6,500.00 add to cart or Buy Direct from
William Reese Co. - Americana
Share this item