LECTURES ON BOTANY, AS DELIVERED TO HIS PUPILS 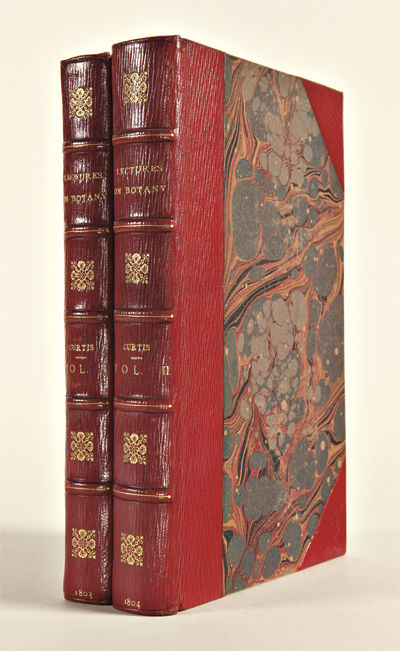 by Curtis, William: Curtis, Samuel, arranger
[London]: Printed and sold by William Phillips, 1804. Three volumes bound in two. [4],131; [6],114; [4],63pp., plus 119 handcolored plates with accompanying descriptive leaves. Frontispiece in first volume. 20th-century three-quarter red morocco and marbled boards by Bayntun, spine gilt with raised bands, a.e.g. Slight shelf wear. Slight foxing, occasional offsetting from plates. Very good. A beautiful set of William Curtis' LECTURES, featuring handcolored engravings within and a fine binding without. The topics covered in the lectures include seeds, vegetation, roots, stalks, leaves, fructification, botanic classes and orders, and much more. The illustrations are beautifully engraved and attractively colored. William Curtis (1746-99) apprenticed to and qualified as an apothecary, but his interests leaned heavily towards botany from an early age. He acted as a demonstrator in botany while studying at St. Thomas' Hospital, and in time was appointed demonstrator of plants and praefectus horti of the Society of Apothecaries at the Chelsea Physic Garden. He developed his own botanical garden for studying native British plants at Bermondsey in 1773, and in 1779 he cultivated the more extensive London Botanic Garden at Lambeth Marsh. Curtis published extensively on botanical and entomological topics, including the long-running BOTANICAL MAGAZINE, and FLORA LONDINENSIS, which cemented his reputation and remains the finest collection of illustrations of British plants ever published.

The engravings were designed by Sydenham Edwards (bap.1768-1819) and cut by Francis Sansom (fl.1784-99). Edwards connected with Curtis as a boy. His reproductions of plates from FLORA LONDINENSIS were noticed by one of Curtis' friends, who brought them to his attention. Curtis arranged for Edwards to receive formal training and within two years Edwards' illustrations started appearing regularly in Curtis' work. In fact, Edwards was responsible for the plates in nearly every Curtis-related publication until Curtis' death. This is a handsome collection of Curtis' work compiled by his cousin Samuel and abundantly illustrated with expertly- colored plates. FREEMAN 889. (Inventory #: WRCAM55104)
$1,750.00 add to cart or Buy Direct from
William Reese Co. - Americana
Share this item