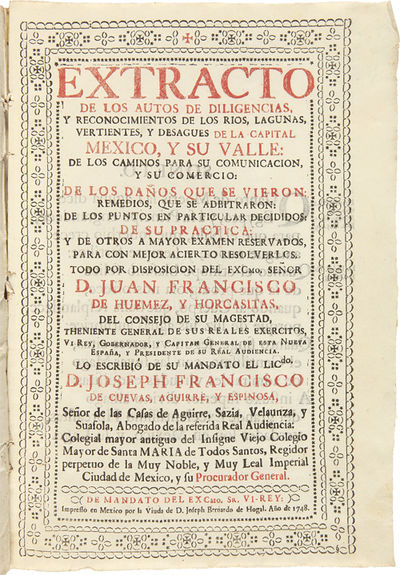 Drainage in the Valley of Mexico had been a concern well before the Spanish arrived, and the indigenous people had developed a series of dikes and causeways to mitigate flooding around Lake Texcoco. When Cortes failed to restore the dikes destroyed by military maneuvers during the Conquest, flooding was even worse, and local Spanish officials experimented with several flood control projects as early as 1553, including draining Texcoco, but problems remained. Over the next two centuries, ongoing public works projects attempted to address drainage issues with limited success. This work contains a compilation of the investigations, surveys, and projects undertaken by various authorities relating to the "Desague" (the ongoing drainage project) up until the time of publication, and sets forth recommendations to deal with the problem once and for all.

Cuevas was a lawyer for the Real Audiencia and Regidor for the city, and had been ordered by the Viceroy to accompany the engineers and superintendent on their survey and to provide a report of the findings. Accompanying the text is the first appearance in print of the remarkable map engraved by Antonio Moreno after a late 17th-century map created by Carlos de Siguenza y Gongora (1645- 1700). Siguenza was a historian, priest, mathematician, astronomer, poet, philosopher, professor, and royal geographer for New Spain; in short, "perhaps the most remarkable man born in Mexico during the viceregal period" (Wagner, SPANISH SOUTHWEST 63). The map, a landmark in Mexican cartography, depicts "Laguna de Tescuco" (Texcoco), the great lake that once surrounded the City, as well as numerous place names, and the major lakes and rivers of the region. The printer of this volume was the widow of master printer Jose Bernardo de Hogal (d.1741). Hogal himself arrived in Mexico in 1720, and in 1727 the Ayuntamiento conferred upon him the title of Impresor Mayor. His widow clearly continued his tradition of precision and elegance in printing.

CATLIN'S NORTH AMERICAN INDIAN PORTFOLIO. HUNTING SCENES AND AMUSEMENTS OF THE ROCKY MOUNTAINS AND PRAIRIES OF AMERICA. FROM DRAWINGS AND NOTES OF THE AUTHOR, MADE DURING EIGHT YEARS' TRAVEL AMONGST FORTY-EIGHT OF THE WILDEST AND MOST REMOTE TRIBES OF SAVAGES IN NORTH AMERICA

London : C. & J. Adlard for George Catlin, Egyptian Hall , 1844.
(click for more details about CATLIN'S NORTH AMERICAN INDIAN PORTFOLIO. HUNTING SCENES AND AMUSEMENTS OF THE ROCKY MOUNTAINS AND PRAIRIES OF AMERICA. FROM DRAWINGS AND NOTES OF THE AUTHOR, MADE DURING EIGHT YEARS' TRAVEL AMONGST FORTY-EIGHT OF THE WILDEST AND MOST REMOTE TRIBES OF SAVAGES IN NORTH AMERICA)