A FORENSIC DISPUTE ON THE LEGALITY OF ENSLAVING THE AFRICANS, HELD AT THE PUBLIC COMMENCEMENT IN CAMBRIDGE, NEW-ENGLAND, JULY 21st, 1773. BY TWO CANDIDATES FOR THE BACHELOR'S DEGREE 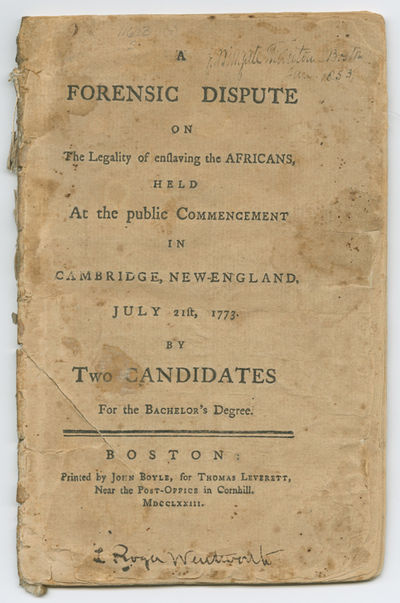 by [Parsons, Theodore, and Eliphlet Pearson]
Boston: Printed by John Boyle, for Thomas Leverett, 1773. 48pp. Dbd. Short diagonal cut through most of textblock, not affecting text. Two unobtrusive ownership signatures on titlepage. Title-leaf and final leaf worn and stained, some soiling, final leaf reattached at gutter. Withal, a good copy. In a cloth chemise and half leather and cloth slipcase, spine gilt. An early and quite scarce American work on slavery, and one of the only known records of a public debate on the legality of slavery in colonial New England. The work is especially interesting as it is presented in the form of a collegiate debate at Harvard on this increasingly controversial issue. Here, Pearson defends slavery while Parsons argues against it, both basing their arguments on the principles of natural law. There is also much included on the nature of human equality and on the perceived emergence of the African from primordial darkness to the light of Christianity.