[AUTOGRAPH LETTER, SIGNED, FROM THOMAS PAINE TO WILLIAM PETTY, FORMER EARL OF SHELBURNE AND PRESENTLY THE 1st MARQUESS OF LANSDOWNE, CONCERNING THE CURRENT PRECARIOUS POLITICAL SITUATION BETWEEN ENGLAND AND FRANCE] 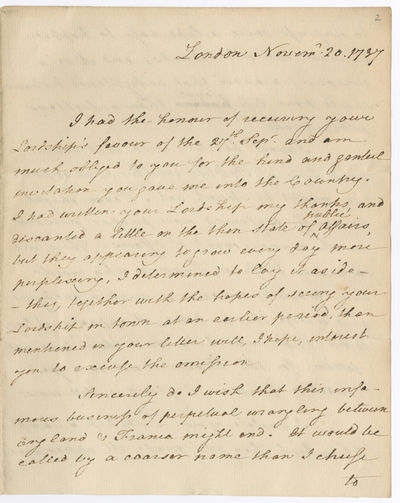 by Paine, Thoma
London, 1787. [3]pp., on a folded folio sheet, docketed on the blank fourth page. Old folds, minor toning. Near fine. In a cloth chemise and half morocco and cloth slipcase, spine gilt. A politically-charged letter from Thomas Paine to his friend, William Petty, former Earl of Shelburne, who was made the first Marquess (or Marquis) of Lansdowne in 1784. Petty was Prime Minister when the treaty ending the Revolutionary War was negotiated between the United States and England. In this letter Paine discusses the tense relationship between England and France, and stresses the importance of an amicable resolution to their differences. He writes that "this infamous business of perpetual wrangling between England & France...would be called by a coarser name" if the conflict was between two individuals instead of two nations, warning of the potentially cataclysmic results of a war.

Here the author of COMMON SENSE opens his letter by extending his thanks to Lansdowne for the kind invitation to the latter's country home, Bowood House, and explains:

"I had the honour of receiving your Lordship's favour of the 27th Sepr. and am much obliged to you for the kind and genteel invitation you gave me into the country. I had written to your Lordship my thanks and discanted a little on the then state of public affairs, but they appearing to grow every day more perplexing, I determined to lay it aside - this, together with the hopes of seeing your Lordship in town at an earlier period, than mentioned in your letter, will I hope interest you to excuse the omission."

Paine proceeds to expound on the precarious political situation between France and England, ultimately hoping for a lasting peace between the two nations:

"Sincerely do I wish that this infamous business of perpetual wrangling between England & France might end. It would be called by a coarser name than I chuse to express were a like case to happen between two individuals; and it is a curious paradox that enlightened nations should have less sense than enlightened individuals. I most heartily wish that some great line of Politics, worthy of an opposition might be struck out. Peace might be easily preferred were proper persons in the management of affairs. There are those in France who would very heartily concur in such a measure, and unless this be done, it appears, at least to me, that something worse than war will follow, for tho' France is not in a good condition for war, England is still worse."

Paine concludes his letter noting he is enclosing a pamphlet (not present here) which has just made its appearance. He is most likely referring to his own work, PROSPECTS ON THE RUBICON; OR AN INVESTIGATION INTO THE CAUSES AND CONSEQUENCES OF THE POLITICS TO BE AGITATED AT THE MEETING OF PARLIAMENT, published the same year in London. The present letter could be viewed as a distillation of this latest pamphlet by Paine, in which he urges the British government to reconsider yet another war with France that would result in disaster for both countries. At the time, England and France were not currently at war with each other, but the possibility of it was omnipresent, especially after battling on opposite sides of the American Revolution, which resulted in weaker defenses and larger debts for both countries.

Paine, an Englishman who emigrated to America just in time to help spark the American Revolution, would become enmeshed in the French Revolution shortly after penning this letter. He moved to France in 1790, and would publish his seminal RIGHTS OF MAN in 1791, in full-throated support of the French Revolution. RIGHTS OF MAN was another successful attack by Paine on the institution of monarchy. As a result, Paine was a hero to the revolutionaries in France, though he would fall in and out of favor with various regimes in Paris until he left France for good in 1802.

William Petty, second Earl of Shelburne and later the first Marquis of Lansdowne, is best remembered as the Prime Minister who forced a liberal peace treaty with the United States on his unwilling king in 1782. During his long political career Shelburne exhibited consistently pro-American sympathies, first as Southern Secretary from 1766 to 1768, and most importantly as Prime Minister from 1782 to 1783. Though Prime Minister for only a short time, it was under Shelburne's leadership that the Treaty of Paris was negotiated between Great Britain and her rebellious colonies, ending the Revolution and formally recognizing the United States of America. After his elevation to Marquess and retirement from active politics, Lansdowne maintained an active sympathy for Americans and their new nation, and commissioned the famed "Lansdowne Portrait" of George Washington, perhaps the most famous image of the first President.

The present letter was first sold at Christie's London in 1994 in the auction of the historical archives held by Petty's country estate, Bowood House, which Paine references in this letter. Since then the letter has been accompanied by a copy of the 1791 edition of Paine's A LETTER TO THE EARL OF SHELBURNE, NOW MARQUIS OF LANSDOWNE, ON HIS SPEECH, JULY 10, 1782, RESPECTING THE ACKNOWLEDGEMENT OF AMERICAN INDEPENDENCE. This was Paine's response to Shelburne's speech regarding the likely consequences for Great Britain given the new independence of America. The present copy of the work carries a pencil inscription on the half title reading, "bought 1933 L," likely written by the then-current Marquis of Lansdowne in that year.

A thoughtful letter by Paine as he grappled with the fraught political climate in France and England. It is interesting to note that this letter comes from the writer most responsible for sparking the American Revolution, writing to one of the men chiefly responsible for ending it. (Inventory #: WRCAM55012)
$25,000.00 add to cart or Buy Direct from
William Reese Co. - Americana
Share this item

[MANUSCRIPT MEMOIR OF WESLEY CALVIN HOBBS, DETAILING HIS LIFE FROM HIS BIRTH IN 1842 UNTIL 1868, FOCUSING PRIMARILY ON HIS SERVICE AS A VOLUNTEER AND LATER OFFICER IN THE UNION ARMY, DESCRIBING EARLY FIGHTING IN MISSOURI, AND THE SIEGE OF VICKSBURG]

[Danville, Ia 1866-1868].
(click for more details about [MANUSCRIPT MEMOIR OF WESLEY CALVIN HOBBS, DETAILING HIS LIFE FROM HIS BIRTH IN 1842 UNTIL 1868, FOCUSING PRIMARILY ON HIS SERVICE AS A VOLUNTEER AND LATER OFFICER IN THE UNION ARMY, DESCRIBING EARLY FIGHTING IN MISSOURI, AND THE SIEGE OF VICKSBURG])