[LEDGER OF THE EXCHANGE BANK OF ELSINORE, CALIFORNIA, AUGUST 1889 TO DECEMBER 1890 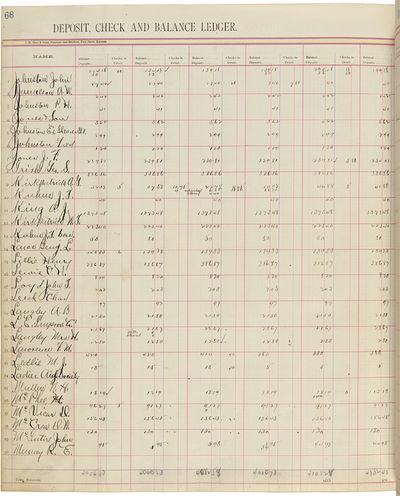 by [California]
[Elsinore, C, 1890. Eighty numbered sections of six pages each, comprised of leaves with folding flaps interleaved with narrower leaves, totaling [480]pp. Folio ledger. Half tan morocco and calf boards, spine gilt with raised bands. Somewhat rubbed and worn, corners bumped, some staining to boards. Inner hinges reinforced. Occasional ink spills throughout, fingerprints and occasional toning to lower corners of most pages (no loss of text). Very good. Ink blotter with the name of "S.A. Stewart / Agent/Elsinore / Cal." laid in. This is an early ledger from the first bank established in Elsinore, California and one of the first banks in southern California. The Exchange Bank of Elsinore was founded in 1887 by Franklin H. Heald, one of the three investors who established the town of Elsinore. The city was officially incorporated the following year as the seventy-third city in California (originally Elsinore was in San Diego County, but the city became part of Riverside County upon its creation in 1893). The Bank of Elsinore was founded soon after, and in 1890 the two banks merged to become the Consolidated Bank of Elsinore, making this possibly the last ledger of the original Exchange Bank.

This ledger tracks the funds of some of the more prominent southern California businesses and individuals of the time, including Machado & Co., owned by descendents of José Agustin Machado, who held Mexican land grants throughout Alta California, including the Ranchos of La Ballona, Santa Laguna, and Santa Rosa. Also featured in the ledger is Horace McPhee (publisher of the SANTA PAULA CHRONICLE), W.G. McVicar (owner of one of the early clay companies in southern California), S.A. Stewart (the agent named on the blotter mentioned above and later president of the Consolidated Bank of Elsinore), several businesses and churches, the local Masonic Lodge, the Santa Rosa Cattle Company, the Ladies Aid Society, the TRANSCRIPT newspaper, and the aforementioned Bank of Elsinore. Among the most significant customers of the bank was the Equality Colony, part of the Southern California Colony Association founded by John W. North and others to cultivate grapes and semi-tropical fruits in the region, which subsequently kicked off a new "gold rush" as horticulturalists and investors flocked to the area to be part of the new and rapidly growing citrus industry.

This extensive banking ledger is a vital financial record of economic, agricultural, and population growth in southern California in the late 19th century. (Inventory #: WRCAM55054)
$4,500.00 add to cart or Buy Direct from
William Reese Co. - Americana
Share this item

by [Confederate Imprint]: Magruder, John B.

THE TEXAS-COLORADO CHAUTAUQUA JOURNAL. Vol. 1. No. 3

Denver April 1899.
(click for more details about THE TEXAS-COLORADO CHAUTAUQUA JOURNAL. Vol. 1. No. 3)
View all from this seller>