A Monograph on the Fluviatile Bivalve Shells of the River Ohio, Containing Twelve Genera & Sixty-eight Species 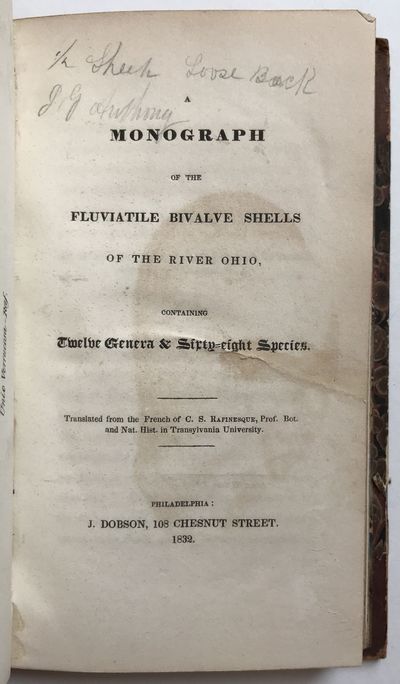 by Rafinesque, C.S.
Philadelphia: J. Dobson, 1832. About very good.. 72pp., plus frontispiece plate. Sympathetically rebound to style in half calf and marbled boards, spine gilt ruled with leather label, edges sprinkled red. Text interleaved with blanks for notes, several of which contain contemporary ink annotations. Title page with patch of light dampstaining and repaired closed tear from fore-edge. Light tanning throughout. Frontispiece uncolored. The scarce, first American edition of this work on midwestern bivalves by the important French-American natural scientist Constantine Rafinesque. The paper provides detailed description of nearly seventy types of mollusk found in the Ohio River, recorded by Rafinesque during his time as a professor at Transylvania College in Lexington, Kentucky. A contemporary and acquaintance of Audubon, Rafinesque was a significant figure in the field of natural science during the early years of the republic; he was responsible for the chronicling and classification of much plant and animal life in the United States, and produced several significant works in that vein. "In the spring of 1818 Rafinesque made a collecting trip down the Ohio River that produced Ichthyologia Ohiensis (1820), the earliest attempt to describe all the fishes of the Ohio, and a series of papers on the mollusks of the river. In all, the trip was so fruitful in new species that his work was excluded from the American Journal of Science because its editor, Benjamin Silliman, feared he would fill its pages all by himself. Having also run afoul of the publications committee of the Academy of Natural Sciences in Philadelphia for submitting to it an article whose substance he had published already elsewhere, he turned increasingly to self-publication and publication in Europe" - ANB. Accordingly, this work was first published in a Brussels scientific journal, Les Annales Générale des Sciences Physiques, in 1820, and was only translated to English and published in America twelve years later in the present form. Scarce on the market, only one copy has appeared at auction in the past fifty years. Sabin 67640. ANB (online). (Inventory #: 849)
$3,750.00 add to cart Available from
McBride Rare Books
Share this item