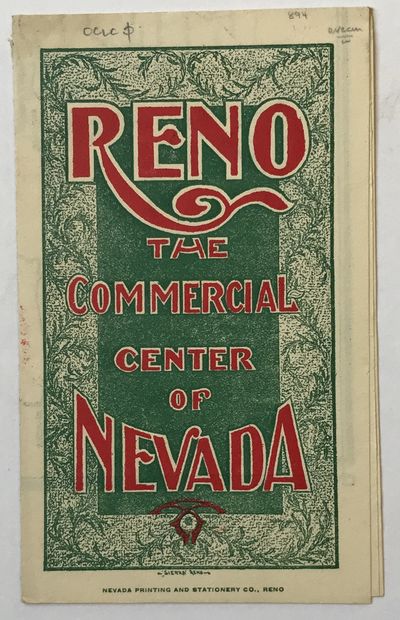 by [Nevada]
Reno: Nevada Printing and Stationery Co, 1905. Near fine.. [4]pp. and a map, on a single folding sheet. Minor wear and soiling. Folding promotional brochure for the city of Reno, touting its location for all things business. A single panel of text by the Commercial League argues for the value of the city, claiming, "All sections of the state should help build up at Reno a distributing center, where material and equipment of all kinds can be obtained without loss of time," thereby encouraging investment and lower rates from the Southern Pacific Railroad. The final two panels bear advertisements from the Nevada Engineering Works, while the verso of the sheet contains a map of Nevada centered on Reno which claims, "Reno is the natural center - All roads lead to Reno." Something certainly clicked, because Reno more than doubled its population to nearly 11,000 souls in the decade between 1900 and 1910. An ephemeral piece, we locate no copies in OCLC, though another brochure for Reno published by the Commercial League appears in a few copies, dated 1907. (Inventory #: 894)
$350.00 add to cart or Buy Direct from
McBride Rare Books
Share this item