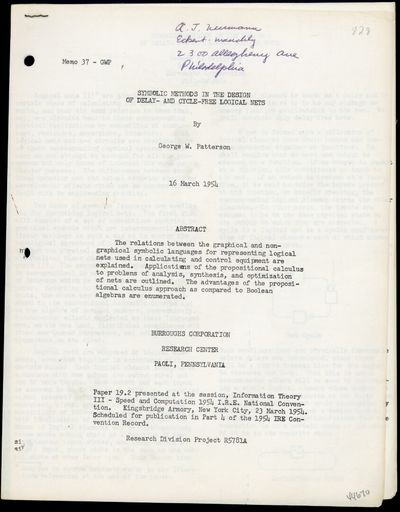 by Patterson, George
Paoli, PA: Burroughs, 1954. Patterson, George W. (1912- ). Symbolic methods in the design of delay- and cycle-free logical nets. Mimeographed typescript. Paoli, Pennsylvania: Burroughs Corporation Research Center, March 16, 1954. Unbound as issued. [1], 9ff. Text diagrams. 281 x 217 mm. Light toning but VG. "The relations between the graphical and non-graphical symbolic languages for representing logical nets used in calculating and control equipment are explained" (title-leaf). "In 1946, Patterson joined the staff of the Moore School of Electrical Engineering of the University of Pennsylvania, where he designed the logic for EDVAC arithmetic circuits and coordinated the logic design for the entire machine. From 1950 to 1955, Patterson was with the Research Center of the Burroughs Corporation, Paoli, Pennsylvania. Then he rejoined the faculty of the Moore School. In 1962, he was Associate Professor and Section Head for the systems logic research at the Moore School. "In addition to teaching and directing research on switching theory, Patterson was active in computer standardization, as a member of the Electronic Computers Committee beginning in 1949, and serving as Vice Chairman in 1962. He was also a member of the ACM committee that wrote the first programming glossary, and a member of the ASA Y32-14 task group that developed standards for computer logic systems" (Engineering and Technology Wiki). The paper bears the signature of A. J. Neumann, an employee of the Eckert-Mauchly Division of Remington Rand. Origins of Cyberspace 827. . (Inventory #: 44670)
$850.00 add to cart or Buy Direct from
Jeremy Norman & Co.
Share this item
Jeremy Norman & Co., Inc.
Offered by