The Morning Star scrapbook first edition! In the the pursuit of happiness 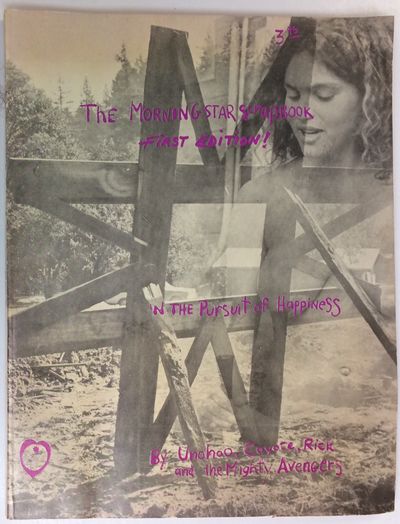 by Unohoo, Coyote, Rick and the Mighty Avengers
Occidental CA: [Friends of Morning Star], 1973. Paperback. 188p., illustrations and texts reproduced from block-lettering, typescript, clippings, drawings and snapshots, newsprint paperstock throughout, 11x8.5 inch decorated wraps, first edition. Paper is uniformly toned and acidic, cover has corner crease, otherwise very good condition. Inscribed (in 2019) by one of the authors, "Unohoo aka Ramón Sender Barayón." Handwriting slightly shaky (Sender was 84 when we asked him to sign some copies). Sender / Unohoo was the first resident to move into the Morning Star commune. Classic hippie utopian / intentional community founded by Lou Gottlieb in 1966 and dissolved in 1972. The commune was notable for its usage of LSD and related drugs, its clashes with the police, Gottlieb's attempt to deed the land to God (courts decided that s/he was not qualified to own land), nudity, and its integral relationship to the hippie movement. (Inventory #: 243221)
$140.00 add to cart or Buy Direct from Bolerium Books
Share this item