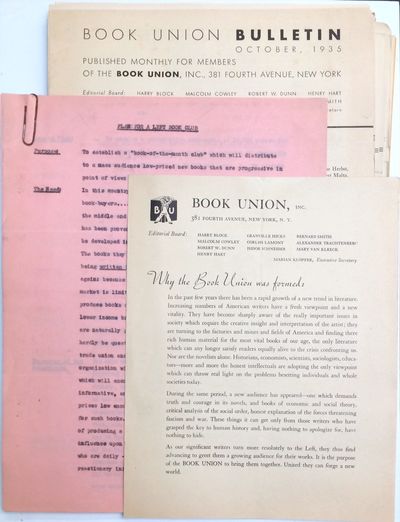 New York: Book Union, Inc, 1939. Thirty-eight issues of the monthly bulletin, mostly four pages, size varying slightly but generally around 8.5x11 inches; most with creases from having been folded for mailing. This group, which belonged to Henry Hart (who was on the board of the Book Union, and who edited the first book to survey proletarian literature as a genre), also includes a five-page carbon copy of a typed "Plan for a Left Book Club" and a four-panel brochure explaining "Why the Book Union was formed." The issues of the Bulletin included here are October 1935, all twelve months for 1936; most issues for 1937 but missing May, July, and November; Feb.-July and Sept.-December 1938 (October with a corner torn off, removing a few letters of text); January through May 1939, and a special Trade Union edition for Spring 1939. Also included is an envelope belonging to Hart that contains miscellaneous newspaper clippings, some about the deaths of left figures, others of unclear relevance. Each bulletin presents a review of the book of the month that has been selected for subscribers, as well as shorter reviews of other recommended works. The advisory council members listed include Langston Hughes, Hugo Gellert, Ben Gold, Lincoln Steffens, Erskine Caldwell and many others. Selected books included not only proletarian literature but antifascist nonfiction and occasional Marxist theory. (Inventory #: 243322)
$175.00 add to cart or Buy Direct from Bolerium Books
Share this item