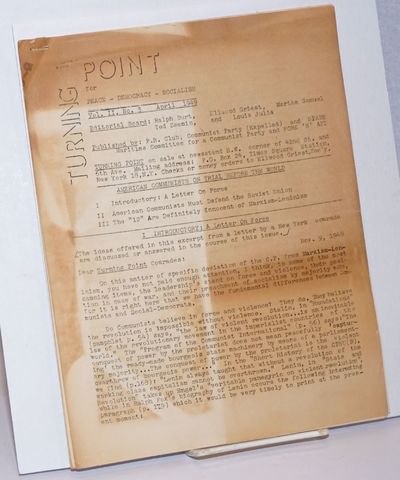 by Burt, Ralph, Ellwood Griest, Martha Samuel, Ted Seemin, and Louis Julia
New York: P.R. Club, Communist Party (Expelled), SPARK Maritime Committee for a Communist Party and Fore 'N' Aft, 1949. 23 mimeographed sheets stapled at upper left, 8.5x11 inches, first page detached but present, page 5/6 stapled in backwards, creased from being folded in half, wraps worn and unevenly toned else good condition. Journal published by the expelled members of the Bronx CP youth group, the Paul Robeson Club, along with the Maritime Committee for a Communist Party. Theme of the issue is "American Communists on Trial Before the World", arguing that American Communists had a duty to defend the Soviet Union and criticizing the CPUSA for their statement saying they would oppose war if it were to break out (rather than fight on the side of the Soviet Union). (Inventory #: 243408)
$30.00 add to cart or Buy Direct from Bolerium Books
Share this item