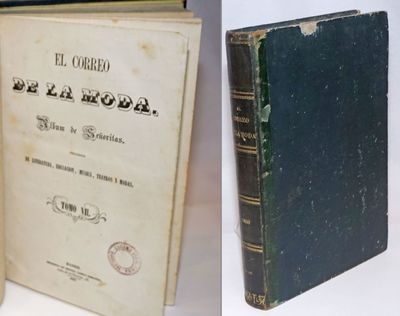 by David, Jules, et alia, engraver-artists
Madrid / Paris: Miguel Campo-Redondo / Lamourex, 1859. 384p., texts printed on reasonably alkaline stock, the complete magazine-year bound in original 11x7 inch black-papered boards and a quarter-calf dark-green spine titled and ruled gilt. All edges tinted aqua-green. El Correo marketed household wisdom exclusively in the Spanish language, madly illustrated with selling-point fashion illustrations (unwise fashion, be it known: "waist not, want not," the message). The case-binding is handleable, with legible gilt, cracked but still-holding hinges, original endsheets unmarked except by foxing, dust & small stains, and a square textblock. It is however very edgeworn with terrific dings to the boards and damage to several plates. However ugly the book-qua-book, most of the 20-odd hand-colored fullpage fashion prints are not only beautiful but exceptionally so (that is, the hand-tinting of them): we have seen perhaps a hundred casebound collections, and the ones in this exemplar are amongst the very best, in terms of the specialized colorwork that is called for in tinting steel engravings; commonly, colors get brushed on too vividly; outlines are breached, areas left blank. We count 27 touched-up plates of which 4 or 5 are partial treatments of a single furbelow, the rest (i.e., the wonderful ones) showing usual small groupings of the wasp-waisted. At least twenty are bogglingly sensitive and successful, though you will find a few flecks, a few small stain-spots and a few seriously torn margins). Not only dresses but faces, limbs, backgrounds and landscapes are flawlessy touched up. In addition to these main-attraction plates there are numerous monochrome plates (lace patterns and such). Complete copy, with all faults and virtues. In addition to lovely handwork on costume and wearer, the artists here have worked their magic on children, animals, backgrounds of mountains and buildings, and foregrounds of flowers and carpets. We have admired these engraved and frequently hand-tinted fashion fantasies throughout our career, most often encountered in British and American magazines, Godey's Ladies Book being the most widely distributed. As here with El Correo, Godey's and its worthy competitors used French artists, engravers and watercolorists. These century-old mags were almost common in the late sixties, while seventies & eighties saw near-extinction, especially of the expertly-tinted. (Inventory #: 243247)
$200.00 add to cart or Buy Direct from Bolerium Books
Share this item

Draft Program of the Revolutionary Workers League of the United States. Issued by the Political Committee

San Francisco : Self-published by the poet, hand-set & printed at The Bread & Wine Press by Harvey Wilder Bentley , 1960
(click for more details about Colloquy [limited edition signed by the poet & printer])
View all from this seller>