The Tales of Beedle the Bard. Translated from the Original Runes by Hermione Granger. With Commentary by Professor Albus Dumbledore. 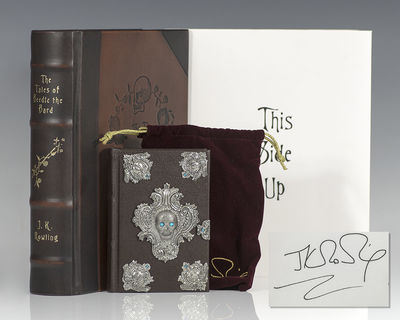 by Rowling, J.K
London: The Children's High Level Group, 2008. First edition, limited issue of this wizarding classic. Signed by J.K. Rowling on the half-title page, with the authentication hologram. Octavo, original brown morocco-patterned boards with silver metal cornerpieces and central ornament accented with faux blue gems, silver metal clasp, marbled endpapers, green silk bookmark, illustrated. Housed in the embroidered velvet bag within the publisher's calf case with gilt titles and tooling to the spine and with the original pull-off slipcase which reads 'This Side Up'. This specially bound edition includes a portfolio of ten additional prints by Rowling that were not issued with the trade or the manuscript editions. Rare and desirable signed, as there was only one book signing event held at the National Library of Scotland. Two hundred children selected through a lottery attended the signing. The Tales of Beedle the Bard, a Wizarding classic, first came to Muggle readers' attention in the book known as Harry Potter and the Deathly Hallows. An introduction, notes, and illustrations are by J. K. Rowling, and extensive commentary is by Albus Dumbledore. The Times reviewed the published book favorably, calling the tales "funny, sinister, wise and captivating" and likening them to the Brothers Grimm. (Inventory #: 104144)
$11,000.00 add to cart or Buy Direct from
Raptis Rare Books
Share this item