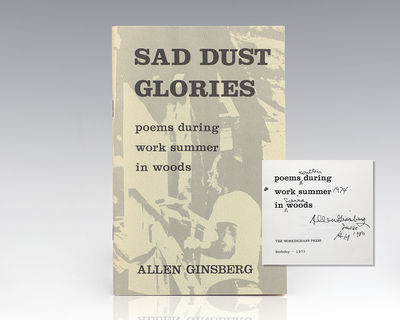 by Ginsberg, Allen
Berkeley: The Workingman Press, 1975. First edition of this collection of poems composed by Ginsberg in the summer of 1974 throughout the Midwest. Octavo, original illustrated wrappers. Signed and dated by Ginsberg on the title page, "Allen Ginsberg Jan 25 1980." Ginsberg has also amended the subtitle toe read: Sad Dust Glories poems "written" during work "," summer "1974" in "Sierra" woods. In fine condition. Written between June and October of 1974, the poems contained in Ginsberg's Sad Dust Glories encapsulate his experiences as a lone traveler one summer over the roads and through the wilderness of the Midwest. Poems include Writ in Moonbeam, To The Dead, The Moon Followed by Jupiter Thru Pinetrees, and Kenji Miyazawa. (Inventory #: 104536)
$275.00 add to cart or Buy Direct from
Raptis Rare Books
Share this item