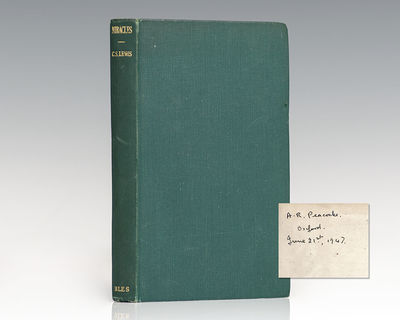 by Lewis, C.S
Geoffrey Bles: The Centenary Press, 1947. First edition of Lewis' study of the logical possibility of miracles, in which he presents the case that a supernatural world may exist including a benevolent creator. Octavo, original cloth. From the library of Arthur Peacocke with his ownership inscription to the half title page, "A.R. Peacocke Oxford June 21st, 1947." Arthur Robert Peacocke was a British Anglican theologian and biochemist. He is perhaps best known for his attempts to argue rigorously that evolution and Christianity need not be at odds and remains the most well-known theological advocate of theistic evolution as author of the essay "Evolution: The Disguised Friend of Faith?" In one of the five arguments contained in the essay, the Jesus-as-pinnacle-of-human-evolution argument, Peacocke proposed Jesus Christ to be "the consummation of the purposes of God already incompletely manifested in evolving humanity." Lewis made the same proposition in Mere Christianity, and began to develop his thoughts on the subject in the present volume which was apparently highly influential in Peacocke's development and was attained by him as a student at Oxford. In very good condition. Bookplate to the pastedown. In Miracles: A Preliminary Study, Lewis argues that before one can learn from the study of history whether or not any miracles have ever occurred, one must first settle the philosophical question of whether it is logically possible that miracles can occur in principle. He makes a case for the reality of miracles by presenting the position that something more than nature, a supernatural world, may exist, including a benevolent creator likely to intervene in reality after creation. Philosophers and scientists including Victor Reppert, William Hasker, and Alvin Plantinga have expanded on the "Argument from reason" contained in the work and credit Lewis with first bringing the argument to light in Miracles. (Inventory #: 104486)
$1,250.00 add to cart or Buy Direct from
Raptis Rare Books
Share this item

Where the Blue Begins.

London : William Heinemann Ltd , 1922
(click for more details about Where the Blue Begins.)
View all from this seller>