Histories of the Kings of Britain. 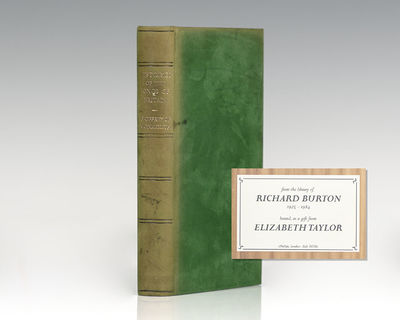 by Geoffrey of Monmouth. Translated by Sebastian Evans. [Richard Burton; Elizabeth Taylor]
London: J.M. Dent & Sons, 1944. Presentation copy of Geoffrey of Monmouth's Histories of the Kings of Britain, specially bound by Sangorski and Sutcliffe at the request of Elizabeth Taylor as a gift for her husband, Richard Burton. Small octavo, bound in full green reversed calf by Sangorski and Sutcliffe with gilt titles to the spine, wood-effect endpapers, all edges gilt, ribbon bound in, Phillips auction bookplate from March 1998 on the front pastedown which reads, 'from the library of Richard Burton 1925-1984 bound, as a gift from Elizabeth Taylor (Phillips, London - Sale 30510.' Burton collected Everyman editions over the course of his lifetime and in 1969 Taylor bought and had bound a set of this edition - the gift is mentioned twice in his diaries in late September and October of that year. In near fine condition with fading to the spine. On December 3, 1998, the fourth wife and widow of Welsh actor Richard Burton, Sally Burton, raised more than 14,000 British pounds for theatrical charities by auctioning his library. The 1,500 books included gifts inscribed to the actor by his former wife, Elizabeth Taylor and by theatrical luminaries such as Noel Coward and John Gielgud. Burton was a passionate collector from an early age of volumes from the Everyman Library, including the present volume. (Inventory #: 104902)
$1,200.00 add to cart or Buy Direct from
Raptis Rare Books
Share this item